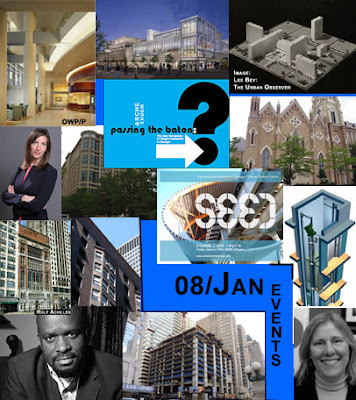 This is the month Stanley Tigerman and Eva Maddox pass Archeworks on to a new generation of leaders. at a January 16th event that will also feature Lee Bey, Sarah Herda, Joe Rosa, Zoe Ryan, Hennie Reynders and Robert Somol (you know, that whole crowd, as Severn Darden used to say). Two days later, there'll be a SEED conference at IIT which will include Jason Fried, Carlos Segura, Jim Coudal and Edward Lifson. Lee Bey will talk, at a Friends of Downtown event, about visionary Chicago projects that never managed to see the light of day, Teng's R. Shankar Nair discusses engineering the new Waterview tower at a SEOAI dinner meeting, urban lofts, elevator innovations, I-Go car sharing, hospitals - Prentice and Children's Memorial, networking and the Center on Halsted. They're all among the 30+ events on the January architectural calendar, and I'm sure there'll be even more once people recover from the holiday sojourn. Get the details on all of January's events here.
(Click on time for permalink) 12:14 AM