Two late additions to the January calendar of architectural events:

It's probably not too late to volunteer for this years competition, held inconjunction with National Engineers Week, Chicago 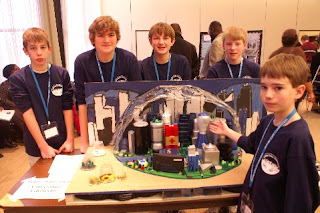 engineering societies will be hosting a student design competition for area schools. The contest will require 7th, 8th grade students with the assistance of an engineer mentor, to design a future city with the aid of the award winning computer game, SimCity 3000 TM from Maxis. Participants will also write an essay on “Keeping Our City Infrastructure Healthy: Using Nanotechnology to Monitor City Structures and Systems.”

The competition will includeteams from 25 Chicago area schools. Dozens of Chicago area engineers (and architects) will review the Future City Models and listen to presentations as students present their Vision of the Future. Besides the models, students will be graded on their posters and essay. Awards will include“Most Livable City” offered by the Chicago Chapter of AIA, “The Most Innovative Structures” given by the Structural Engineers of Illinois, “The Best High-Rise Building” by the Chicago Committee on High-Rise Buildings, and several awards from the American Society of Civil Engineers, including “Best Transportation System”, “Best Future City” and “Best Planned Zoning”. The Society for Marketing Professional Services will present an award the “Best Future City Promotion”.

Team members from the winning school will advance to the final judging in Washington, DC. during National Engineers Week, February 17-23, 2008. The winner of the national competition will receive a week's trip to Space Camp. Top teams from the Regional Competition will be honored at the Annual Chicagoland Engineers Benefit, February 22, 2008.