Marina City In Its Cups 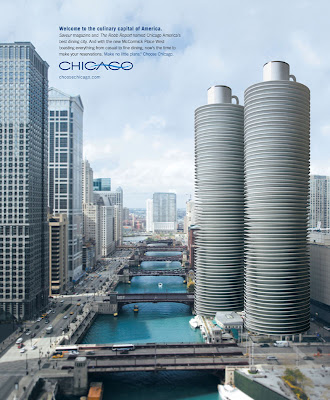 Via the indispensible Marina City Online website comes this ad for the Chicago Convention and Tourism Bureau in which the twin towers of architect Bertrand Goldberg's iconic Marina City are rebuilt entirely out of a coffee cup resting atop each of twin 600-foot-high stacks of about 60 giant saucers. (or maybe they're just actual size serving platters from a Brazilian steakhouse.) It kinda gives you a feel for what Marina City might have looked like - minus the coffee cups - if it had been designed by Oscar Niemeyer.

It's the first of a series of ads created for the bureau by Chicago ad firm Downtown Partners, run by a guy whose computer I used to take care of, founding partner Jim Schmidt. In a positive review, Chicago Sun-Times columnist Lewis Lazare reports that it's the first of six print executions, with others to tout the city's "ethnic diversity, its many festivals and its physical beauty, among other selling points." The Marina City ad seeks to underscore Chicago's claim to being "the culinary capital of America." I wonder if Ellis Levin tried to shake anybody down for royalties.

wow that is awesome!

Lynn, the Marina City condo board will probably drop their threat to sue over such images.

However, I am reporting you to the Coffee Mug Makers of America (CCMA), who will come after you for reproducing this depiction. They'll get that publication's editors, too.