We're Not in Marlboro Country Anymore: Jonny Greenwood's score for There Will be Blood

This past Sunday's New York Times has a story by Dennis Lim on how composer Carter Burwell deploys quiet, natural sounds, and a Partchian assembly of unconventional instruments to create a largely subliminal "anti-score" (sixteen minutes of music total) to heighten 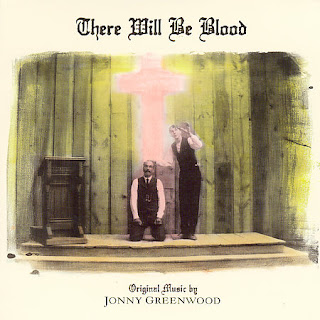 the tension in the Coen brothers' latest opus, No Country for Old Men. It almost makes me want to see the film.

It brings up the old question of the intrusive film score, where every kiss gets a Wagnerian swelling, and every joke an insipidly jaunty cadence to let you know it's time to laugh. Puritan that I am, I used to consider the best film scores to be the ones that were almost invisible, that, like Burwell's, did their work almost subliminally.

And yet, it's not always so. Many of the greatest film scores are deeply intrusive. Think Bernard Hermann's score for Vertigo, with its deliberate crib of Tristan for its story of obsessive love. Think The Godfather. Without Nino Rota's score, the film we've come to know wouldn't exist.

Rota's music is both intrusive and recessive. He often keeps the music at bay at the most dramatic moments. The scene where Michael Corleone assassinates a mob rival in a restaurant is accompanied only by a Burwell-like background of natural sounds, climaxing with the deafening screech of an unseen passing "L" train. It's only after the deed is done and the bodies hit the floor that Rota's score kicks in, at full blast, and not with a cadence of triumph but with a dark sense of doom being set into motion. The score serves as an often ironic commentator. Where traditional gangster movies used aggressive, driving music to hype the violence, Rota's score stands apart, the voice of an outside narrator: sad, mournful, even wistful. In counterpoint to the seductive catharsis of the brutality on screen, Rota's music intimates the consequences - loss, emptiness and longing.

Still another way is that of the remarkable new score by Radiohead's Jonny Greenwood for Paul Thomas Anderson's There Will be Blood. The extended opening sequence of this extraordinary claustrophobic epic of raw ambition in pioneer California is completely without dialogue, wide shots over spare, spiky music that permeates into the audience's psyche the character of the sparse, endless terrain: mysterious and unsettling, with a presence ripe with intimations both divine and demonic.

Among the several striking things about Greenwood's music is that it's accomplished, not with electronics, but almost entirely with strings. There's no brass or woodwinds, and no percussion save for a piano and the thwacking of bows. Greenwood draws on the work of avant garde classical composers of the 20th Century. According to Greenwood's Wikipedia profile, Oliver Messiaen's gigantic ''Turangalila'' Symphony is his "all time favourite piece of music." (Like Messiaen, Hermann in Vertigo, and Maurice Jarre in Lawrence, Greenwood has been drawn to the Ondes Martenot for his score for Blood.) Contemporary composer Arvo Pärt is another influence; his Fratres also shows up in Blood. You can't listen to the "Henry Plainview" track on the soundtrack without thinking of Gyorgy Ligeti's Atmospheres. The only conventional melody comes in a brief spurt of the Brahm's Violin Concerto, in the Anne-Sophie Mutter performance under Karajan, which in the context of the film becomes exultant and unsettling at the same time.

Out of all this, Greenwood creates his own distinctive, expressive and powerful language. There Will Be Blood is the most interesting film score I've heard in some time. It's out on CD, and you can download it on iTunes. Check out the score; check out the picture, one of the year's very best, going into wide release this coming Friday. You can read an extensive interview of Greenwood and Paul Thomas Andersen from Entertainment Week here.

If you enjoyed Jonny Greenwood's compositions for "There Will Be Blood," then you should check out the soundtrack he did for "Bodysong." You should also try to check out the movie "Bodysong" as well, it is very interesting, conceptually and visually. But the soundtrack is even better, although more avant garde than what he did for "There Will Be Blood."