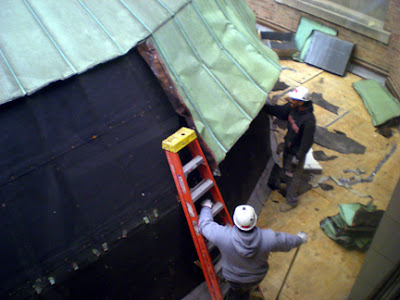 For over half a century, the great Tiffany glass dome over Preston Bradley Hall has been living a lie. All with the best of intentions, of course, but still . . .

What's claimed, at 38 feet in diameter and a thousand feet square, to be the largest Tiffany dome in the world was completed in 1897 as part of the new Chicago Public Library, designed by Shepley, Rutan and Coolidge, the firm that succeeded that of Henry Hobson Richardson after that architect's 1886 death. At the time, the entire cost of the library building was put at $2,000,000 but the Chicago Cultural 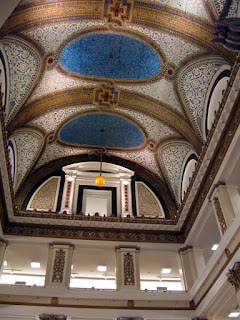 Center, which has occupied the building since 1977, estimates that the dome, alone, has a current, inflation-adjusted value of $35,000,000.

The dome's designer was the Tiffany Glass and Decorating Company's "chief mosaicist" Jacob A. Holzer (1858-1938), whose other Chicago commissions also include the stunning Tiffany mosaics that can still be seen in the lobby rotunda of Holabird and Roche's 1893 Marquette Building, as well as the 6,000 square foot Tiffany Dome at Marshall Field and Company - now Macy's - on State Street (pictured right), which also claims to be "the largest Tiffany dome in existence." Fight it out among yourselves.

Sometime in the 1940's, the Preston Bradley dome was covered over by a second outer copper dome to protect the 30,000 individual pieces of glass. The downside? The dome was now backlit rather than sunlit, "perfect" and artificial 24/7.

The Cultural Center has now undertaken to restore the Preston Bradley dome back to its original state. (According to the Cultural Center, a restoration of the dome's little brother, by Healy and Millet, over the Grand Army of the Republic rotunda on the north side of the building, is due to take place next year.)

In 2005, the oculus of each of the domes, (that of the Bradley features symbols of the Zodiac) was restored and uncovered under a new mini-skylight to test the process. Last December, the art glass panels of the Bradley dome were removed and replaced with Plexiglas replica's. Early this month, as you can see in these photographs from our correspondent Miguel Escanaba, workers began deconstructing the old outer dome, along with its concrete supports. 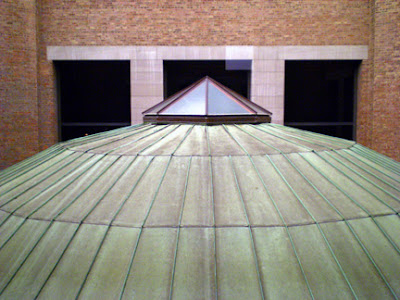 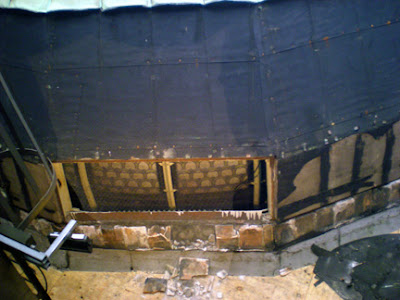 Measurements will be taken for the a new transparent skylight that will protect the restored glass, over 1,500 pieces of which were found to be cracked. Those pieces will be repaired, and all the glass pieces cleaned and brought back to their original color. The original cast iron frame, in 241 sections, that held them all in place will also be repaired and restored, and new backlighting installed. During that process, scheduled to take place April through June, Preston Bradley Hall will be closed off, but with the ongoing work on public view off the adjacent landings. The Cultural Center puts the cost of the project at $1.365 million, most of which is coming from the Central Loop TIF. You can follow the Cultural Center's reporting on the progress here.

If all goes well, the great dome at Preston Bradley Hall may, at times, be less bright, but it will be more alive. No longer addicted to bulbs, it will return once again to its original form as an ever-changing barometer of the variable affections of the sun. 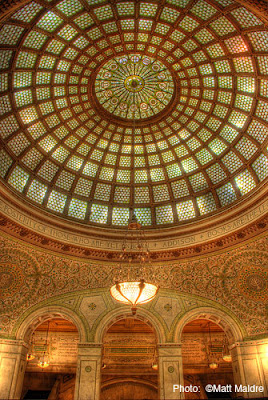 Fascinating. I'm really looking forward to seeing the dome, properly lit as intended. Thanks for the update!

thanks for the update and this completely clear and wonderful photos