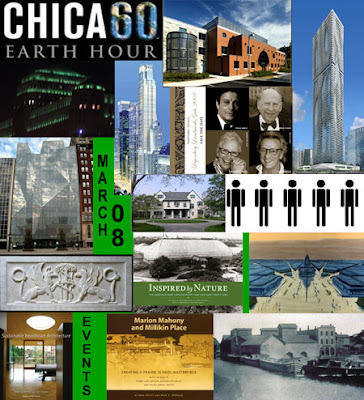 Ok, now this is getting out of hand. I never get everything in the first pass, but there's already over 50 events on the March calendar of Chicago Architectural events. There's lectures by Thomas Hoepf, Stanley Tigerman, and Jeanne Gang, a trailer for Judith Paine McBrien's new documentary on Daniel Burnham, the 4th Pecha Kucha night, with Tim Samuelson and Lynn Becker, Detlef Martins at IIT, Michael Rock and Albert Pope at UIC, stonecarver Walter S. Arnold at a CAF lunchtime lecture, making the Merchandise Mart green, Minne Sullivan discussing Howard van Doren Shaw's Ragdale for Landmarks Illinois, a Preservation Quiz Show pitting Deputy Commissioner for Landmarks Brian Goeken, David Bahlman, Jonathan Fine, Phyllis Ellin and Vince Michael against each other in a battle of wits in their knowledge of Chicago landmarks, and last but not least: You!, cordially invited to join Chicago Earth 2008 in turning off your lights from 8 to 9 P.M. on March 29th. But wait: there's much, much more! Book signings, workshops, seminars, plus local auditions for ABC's newest reality show, Engineer Swap. Check it all out and start filling up your dance card, here.
(Click on time for permalink) 2:20 AM