"Everybody wants to get into the act!", Jimmy Durante used to fume, and

now you can add Chicago Tribune architecture critic Blair Kamin to that number. He has a new blog, The Skyline, (not to be confused with Philadelphia Inquirer's Inga Saffron's Changing Skyline). He's been posting items since Mid-March.

A lot of the content is simply a republication of his own print columns and references to the work of other Trib writers on architecture and development issues, but there's a great call out to a crackerjack profile, complete with audio, from the Yale Alumni Magazine (Kamin's alma mater, as he's wont to remind you) on the great Vincent Scully, still going strong at 87, at least partially due to his life-long commitment to strenuous rowing, even in the raw winters of Long Island Sound. The Skyline also has a rather anemic list of recommended events (today numbering but two) and a nice set of links to other bloggers, including myself (many thanks), Edward Lifson, Inga Saffron, Ned Cramer, and a top-notch blog I didn't even know existed, that of the New York Time's indispensable writer on architecture, David Dunlap.

Welcome, Blair. Like Andrew Patner's The View From Here, The Skyline is a great addition to the Chicago blogging scene. 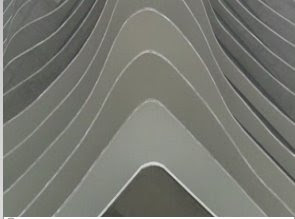 pieces about to appear. This weekend, it's a feature article, At Aqua and other projects, Jeanne Gang offers material evidence for her 'rising star' status, which is an excellent take on the work of someone who's emerging as one of the city's top architects. There's also a great video , produced by Tom Van Dyke, (for which I'm having a hard time finding a link on the main article) with Kamin going up into Aqua with Gang and developer James Loewenberg, from which the signature image you see here was taken. If nothing else, Aqua is going to keep architectural photographers employed for decades.

Kamin also talks about Gang's new SOS Community Center at 76th and Parnell, which I finally got out to see today - hence the photograph - and expect to be writing on in the not too distant future. 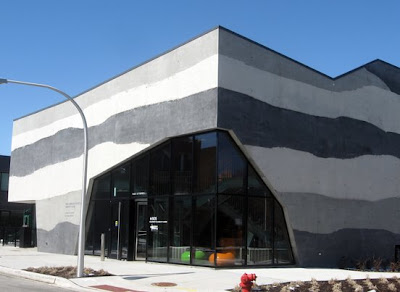 And now for something completely different. Here's a link to a photo gallery of dioramas employing iconic Marshmallow Peeps (or, as people like me you can't bring themselves to utter the word "Peeps" in polite conversation refer to them, Marshmallow Chickens). They're the six finalists in the Trib's contest for Peep populated scenes. (Does Sam Zell know about this?) Expecting maybe a handful, the Trib was overwhelmed with over 500 entries. The winners include Peeps Playing With Fire and my favorite, Vincent Van Peep's Bedroom in Arles, complete with earless yellow rabbit. Check them all out here.

Thanks for the reference to Andrew Patner's blog; now, there's a real critic, not just a reporter.