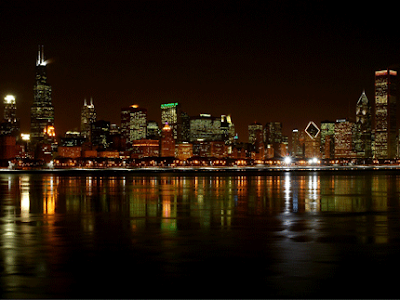 This Saturday, March 29th, from 8:00 to 9:00, Chicago Earth Hour is urging Chicagoans to turn off their nights to join "neighbors and businesses and millions of people around the world to make a bold statement about climate change."

Chicago is the United States flagship city for the World Wildlife Fund's initiative, whose local partners include Leo Burnett, ComEd, and the City of Chicago. Chicago Earth Hour organizers are urging you spend the hour contemplating your energy wasting sins and making vows of penance through reducing your carbon footprint in the year ahead. They're also suggesting you use the time to "replace your old light bulbs with energy-efficient compact fluorescent 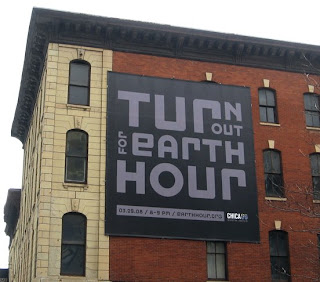 bulbs," but be careful not trip in the dark, because if you break one of those new "green" bulbs, the escaping mercury vapor will create a mini-hazmat situation right there in your living room.

Organizers are working to get the lights turned off on major Chicago landmarks. However, essential lighting in streets, hospitals and the like will remain in the "on" position, so don't expect the stars in the heavens to suddenly reveal themselves in a darkened Chicago sky, as neat as that might be to contemplate.

Despite coal-ridden China's efforts to overtake us, according to Chicago Earth Hour the United States remains "the world's leading emitter of carbon dioxide, with over 20 tons per person produced every year."

If anyone is curious, I made a rather negative blog entry about one of the buildings--a Chicago landmark--that decided it was too good (or too cheap) to go dark. There are a couple others, but this one took the cake.