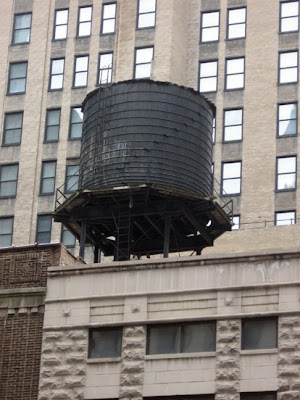 Great minds (or at least their headline writers) think alike.

Tanks for the Memory - an article I wrote a few years ago on the Chicago Architectural Club's Water Tanks competition.

on Water Tanks of Chicago: A Vanishing Legacy, a new book of Larry W. Green's photographs and paintings on the cities surviving stock of elevated water tanks, which began ubiquitous after the Great Fire of 1871 as to a way to quickly deliver water, pressurized through gravity, throughout a building to put out blazes.

You can check out my article on water tank's history in Chicago, and the nearly 200, often 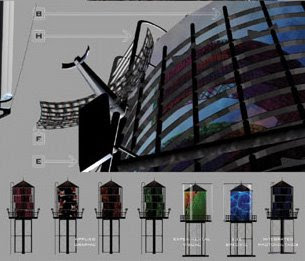 enormously creative and beautiful entries to the CAC competition, including Rahman Polk's striking winning entry, involving water tanks, wind turbines, LED's and wireless access points, here. Despite the mayor suggesting water tanks to the CAC as a topic of a competition, and his continued participation, absolutely nothing has come of any of the proposals in the competitions, which was pretty much what I fear but, hey, that's life in the big city.

And you can read more about - and order - Green's new book, here.