A Tale of Two Roofs

As was to be expected for an architect at the peak of his fame. power and influence, he's now getting a bit of pushback. Last month, James S. Russell led off with Renzo Piano, Favored Museum Designer, Wears Out His Welcome, where the Bloomberg architecture critic claimed that "Piano has benefited from a trend away from sculpturally
expressive museums to bland designs that are invariably described as `architecture serving art.''

Now, fresh off an article in the Architectural Record on Debunking a myth about museums that pay for themselves, New York Review of Books architecture critic Martin Filler follows up with Broad-Minded Museum, a detailed account of the tangled web, and mixed results, behind Piano's new Broad Museum of Contemporary Art at the Los Angeles County Museum of Art. It was built to house the 1,800 piece collection of real estate tycoon Eli Board and his Broad Foundation, valued at $2.5 billion.

Except that it was soon revealed that Broad wasn't really giving LACMA any of the art; title would remain with Broad and his foundation, which will make the ultimate decisions over what will actually be on exhibition. What LACMA thought to be a coup acquisition turned out to be a very tony, high-end variation of a fast food franchise, and quite possibly a second string one, at that. Last June, Broad announced a $26 million gift for a Zaha Hadid designed Eli and Edythe Broad Art Museum at Michigan State University, and one can well imagine part of Broad's collection being siphoned off to be exhibited in East Lansing, with a chain of McBroad Museums, a la Guggenheim, perhaps close behind, barnstorming Broad's art across a national, or even international circuit.

Filler takes note how at this point of his career, Piano seems increasingly to be recycling his greatest hits. At LACMA, there's the bold color and soaring escalator echoing the landmark Piano/Rogers 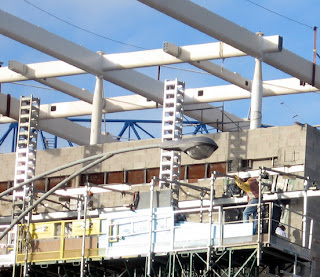 1970's Pompidou Center in Paris, and expressive roofs that are coming to become a calling card. Filler recounts a conversation between Piano and Broad, who expressed his determination to get the cost down below $200 a square foot. "The roof's great, except it cost more than the rest of the building," Filler quotes Broad. To which Piano replied, "Eli, do you remember one day, we were around the table and you said, "How much do we save if we take the roof away?" Well, you save a lot, especially on the architectural fees!"

Filler speculates that Broad's push for economy "might have led to the architect's use of rows of relatively rudimentary mesh ceiling panels below the rooftop's factory-style sawtooth skylights," which Filler says do not perform at the level of Piano's acclaimed galleries at the Menil Collection in Houston and Nasher Sculpture Center in Dallas, calling the light at the Broad galleries often "gray and gloomy." 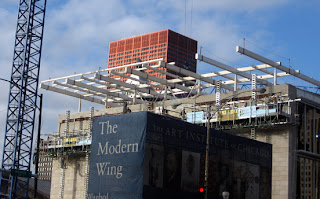 again, the roof is the big tuna driving the building, an over 200 feet square "flying carpet" of complex, computer modeled sunscreen elements, fabricated in Turkey, diffusing the light filtering into the top floor galleries, a magic carpet billboard enticing the hordes in Millennium Park to cross the Piano-designed Nichols Bridgeway to a third floor entrance to the Modern Wing. No word yet on what percentage of the quarter-billion budget is going into that roof.