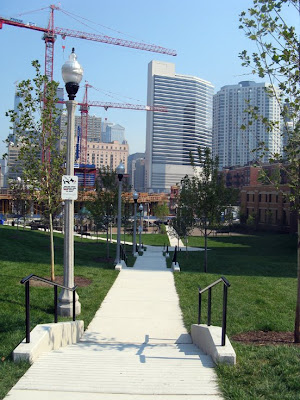 Not that we've been content to leave it there. George Pullman grew rich jacking up buildings to the higher street level the city created to raise Chicago up out of the marshy muck that become an unhealthy cesspool. Chicago may have few hills outside of Beverly, but we've built our own, usually along above-grade railroads and roadways.

Case in point is the area west of the Loop that's come to be know as Hubbard's Cave, where the Kennedy expressway burrows beneath a continuous concrete mat of surface streets, many of which themselves course through the area atop high viaducts.

Des Plaines Avenue just south of Kinzie is one of those stilted thoroughfares, and on 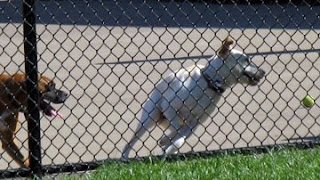 September 25th the Chicago Park District dedicated a new park that is one of those rare - and welcome - cases where the changes in the city's terrains aren't hidden, but worked with. The 1.03 acre park makes the descent from Des Plaines down to Jefferson Street in a series of rolling hills and sloping walkways. The $5,000,000 project includes a playground and enclosed dog park, some tennis balls included.

The land on which the park stands was donated to the city by a subsidiary of Fifield Realty Corporation, which is rapidly populating the former industrial area with a series of staggeringly mediocre constructions. A neighborhood group, the Fulton River District Association, estimates that there are 3,500 to 4,000 residential units within a two-mile radius of the park. 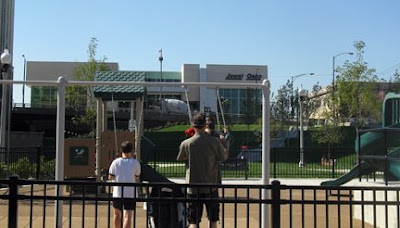 The crowning temple on this shining city on a hill is a new 65,000 square foot Jewel-Osco, designed by Camburas and Theodore, Ltd. of Des Plaines (the suburb, not the street.) The project is being submitted for LEED certification. The roof combines 45,000 square feet of reflective membrane and 22,700 of green LiveRoof system. Recycled building materials were procured from within a 500 mile radius to reduce transportation costs, and 98% of construction waste was recycled. There are sensors that adjust heating and cooling based on the number of people in the store, and a large salad bar with lots of different kinds of olives. 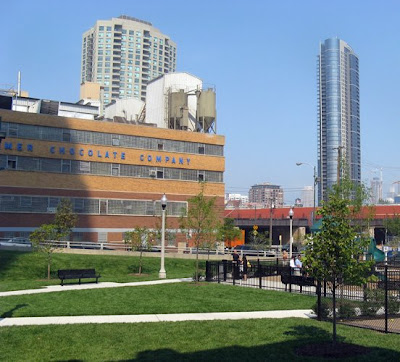 At the moment, the new park's name is its number - #551. A worthy individual is sure to soon be found to honor as the park's permanent namesake, but this is really the Chocolate Park. It sits at the foot of the massive Blommer Chocolate works. Despite the crack efforts of the EPA, which had no problem with British Petroleum dumping thousands of additional pounds of toxic chemicals into Lake Michigan but was johnny-on-the-spot in forcing Blommer to drastically curtail its aroma producing emissions, the faint smell of chocolate still pleasantly hovers the city's newest greenspace, adding a graceful endorphin high to the recreation.

The Fulton River District Association is putting together an advisory council for the new park, to assist in the park's governance and maintenance, including a "Clean and Green Day" this coming Saturday, October 15th, from 9 a.m. to 11:30. For more information, contact Maria via phone, 312/217.6580, email, or visit their website. 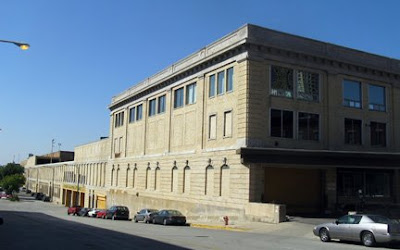 Right now, the "hill" on which the new Jewel-Osco was built, 25 feet above ground level, simply drops off to the west, but the contours of Park 551, whose stepped descent mirrors that of the adjacent Pickens Kane building to the northwest, suggests that we could foster a lot better city if the developers filling up the area with new buildings took the time to more creatively to work the changes in terrain into the design of their structures. 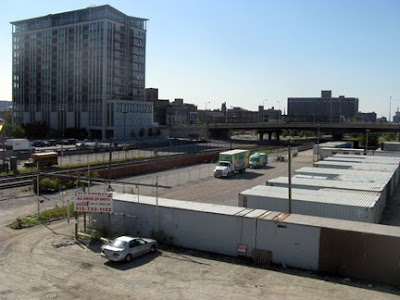 So who would be a really interesting Chicagoan to name the park for?

I say name it for Fredric Brown's novel The Fabulous Clipjoint, which describes the near north side when it was poor and seedy and definitely not LEED-certified.

I love the idea of calling this Chocolate Park.