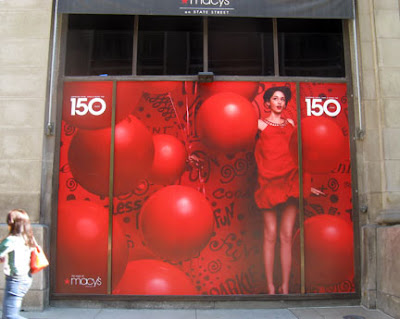 Just when you think Macy's couldn't do anything more to trash the legacy of the historic and iconic Marshall Field's department store, they take it to a new level. It was Marshall Field's, more than anything else, that made State Street one of the world's premiere shopping streets. Now, apparently, Macy's can no longer even be bothered to dress its State Street windows. 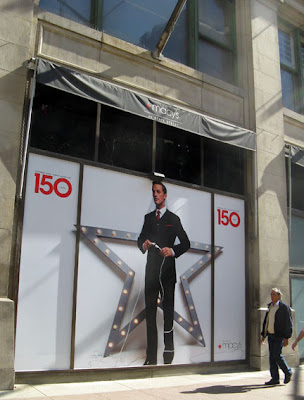 Only two years after snuffing out the venerable Marshall Field's name, Macy's is rubbing the noses of Chicago shoppers in its 150th anniversary celebration, which falls six years short of the 1852 origins of Field's as the Potter Palmer emporium at 137 West Lake. Once one of the great prides of retailing, the State Street windows are now papered over with magazine-ad-like posters that are a supersized version of those usually found hastily pasted onto the walls of alleys and boarded-up buildings. Belying its claim of maintaining it as a distinctive midwestern "flagship", Macy's continues its debasement of its State Street property into just another generic outlet of an anonymous supply-chain retailer thinking it can save the department store by running it like an upscale Wal-Mart. 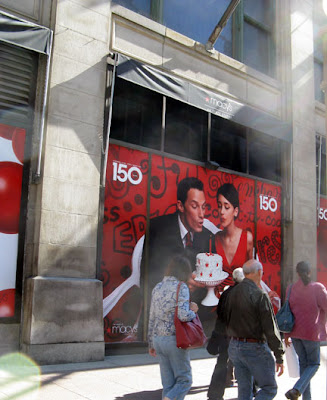 This is really disapointing. I wonder how we can voice our displeasure with Macy's lack of care in the stewardship of one of our cities finest landmarks. I'm concerned that boycotting the store will just lead to further disregard for its well being.

My wife and I were in the city yesterday and had time for a bite to eat before catching our train. Not growing up near the city, she wasn't aware of the whole hostile takeover thing and said, "Let's get something to eat at Marshall Field's". I told her that only the signs on the building were "Fields" ad no way was I going to step foot inside that place while a New York company owned it. I don't regret my decision!

Macy's is based in Ohio. Ots owned by Federated Department Stores. So by boycotting Macy's you are boycotting a fellow midwestern rust belt corporation. But your so fucking smart you knew that you hillbilly. Marshel Fields went out of business 20 years ago.

Thanks for blogging about Chi. architecture. I'm a blogger about spacedesign, too: spacedesignjournal.com. I'm wondering if anyone is going to next month's AIA event of Foster's gig in Racine. I'd like to carpool. Contact me at spacedesign232@gmail.com.

Lynn, "Anonymous" is correct: Macy's may maintain a corporate office in NYC, but it is HEADQUARTERED in Cincinnati.

Additionally, when Marshall Fields was acquired by BATUS in 1982, it ceased operations as a public company. From then on, it existed only as a nameplate. So, technically, "Anonymous" is correct yet again.

Sorry, Macy's may claim on paper a Cincinnati headquarters but the power is elsewhere. It was the old Federated that was based in Cincinnati, and it is not just symbolic that the corporate name was recently changed to Macy's, Inc. Chairman, President and CEO Terry Lundgren lives on New York's upper east side and "presides over one of the largest retail empires in the world from an office in Macy's flagship in Herald Square."

Even in decline, Field's was "not just a nameplate" after the BATUS buyout, but a division with local buyers and a real management autonomy.

Gee Anonymous...does it make you feel good about yourself to call me a "hillbilly" and question my intelligence. At least I have the guts to post my name and not settle for "anonymous". I'm impressed.

As a former employee of the old 'Dayton's - Marshall Field's/Target corp...It makes me sick to see what they (Macy's) has done to a fine department store that cared about their customers and contributed to so many great causes. I Attended a Macy's card cutting party recently and have NOT set foot in one of those stores in over two and a half years.

Macy's will NEVER be accepted in Chicago, especially at State Street.

It is fun to watch Macy's twist in the wind. Remind your friends and family to buy you NOTHING from Macy's this Christmas season.


Chicagoans are killing the Macy's on State simply by shopping elsewhere. By killing that store, there is the opportunity for the Field's name and quality to one day return.

Macy's on State Street is a ghost town. The boycott is working!

Sorry ! ! ! Fact of life !
Nothing is forever ! !
The original Macy's was bought out years ago ! Used to be 8 stores now 800. They bought the name . I'll guess I'll wait for the Marshall Field's Thanksgiving Day Parade . NOT !

As a native Chicagoan (currently residing in Milwaukee) the devolving of Field's into Macy's has been very sad. I accepted Field's demise long ago -- they stopped "being Fields" when BATUS purchased them -- but why does Macy's have to suck?

I understand that the economics of retailing are ferocious -- the profit margins are much thinner than most customers realize. There are only two ways to survive.

One is to become WalMart by providing zero customer service, beating the snot out of suppliers to get the maximum amount of merch for the minimum cost, and put zero into the store. The profits margins are still small, but you make it up in volume.

The other way is to treat every customer like a king or queen, offer truly one-of-a-kind merchandise and fashions, and to make the stores a destination. The plan is that customers see the value and you can command a higher price on what you do sell.

In between lie the rotting carcasses of a legion of dead and dying retailers. Mediocre products and services, and baffling store layouts. Merchandise priced at full retail mark-up, but never actually selling for more than clearance. Their headstones are on display on State St.

I am sad to see Marshall Field's go. My mother used to shop heavily at the flagship store. When it became Macy's, she was sad to see a Chicago landmark go but thought that it was the same store just with a different nameplate. After just one trip to the 'new store' she returned home fuming that all Macy's had to offer was cheap, overpriced and pompous junk. She used to regularly spend hundreds of dollars at Marshall Field's every month. It has been three years and she has never bought anything or stepped another foot in that store.

Every Christmas our family sends out a "this past year" letter in our Christmas cards. A now-standard part in the final paragraph, states "Another holiday without Marshall Field's traditions; BOYCOTT Macy's...!"
John & Lisa