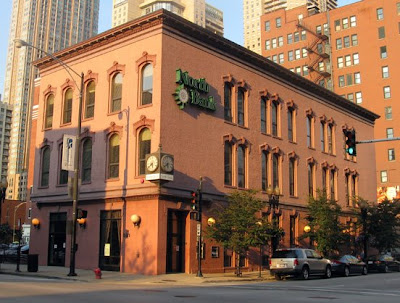 According to a conversation I had a few weeks ago with Jonathan Fine, former President of Preservation Chicago, it all began when preservationists went to the city concerned about the fate of the elegant 19th century building at 501 N. Clark. It stands smack dab between two huge surface parking lots which king-of-River-North Albert Friedman has sought to be rezoned for a 729-room hotel.

Friedman has been a conscientious caretaker of historic architecture in River North, beginning with his restoration and renovation of architect Otto Matz's 1893 Courthouse 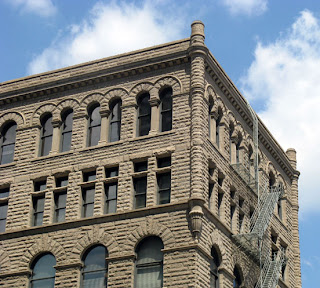 at 54 W. Hubbard - the setting for Ben Hecht and Charles MacArthur's classic play, The Front Page - into the office complex Courthouse Place. It was designated an official landmark in 1993, exactly a century after its completion. However, he's seeking to demolish 501 N. Clark, although what's described as a "three tower" hotel could easily be built around it. (Why anyone would want to build a huge hotel when the glut of rooms already coming on-line, coupled to the imploding economy, has sent occupancy rates plummeting, is a mystery to me, but then Friedman has grown rich developing River North, while I'm writing a blog for free. We'll leave it to you to decide whose judgement may be the more reliable.)

And so it plodded along, until the Commission on Chicago Landmarks dropped a bombshell onto its September agenda: a proposal for a sprawling new River North Landmark District that stretches across all or part of 15 square blocks of prime real estate, from behind the Merchandise Mart, to the row of loft buildings lining Hubbard as it approaches Wabash, and as far north as the former Army Surplus Store building at Clark and Erie. It was a bombshell because, according to a report in Crain's Chicago Business, property owners were given next to no advance notice and, according to Friedman, were left "befuddled." 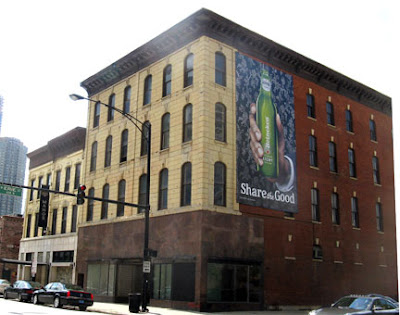 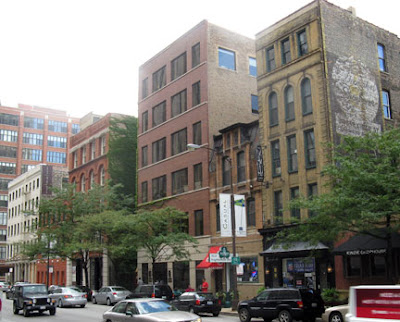 The plan wound up being removed from the September agenda at the request of the area's alderman, the 42nd ward's Brendan Reilly, and now, in his October 3rd newsletter to constituents, Reilly announces another postponement:

I am faced with the question of another deferral or proceeding with the map as initially drawn. Since I still have some unanswered questions, in addition to all of the concerns you raised, I feel it is most appropriate for me, as your elected representative, to take some additional time to carefully consider all aspects of the district before we proceed. I have asked the Landmarks Commission to defer this item from the October agenda.

During that time, I will be meeting with the Department of Planning and Development to examine the proposed district and as appropriate, make changes. I am deeply concerned about imposing undue burdens on building owners whose property may not be part of the final designation. I recognize that this is an extremely difficult economic environment and my task is to protect my business owners.

With the economy in steep decline and projects being put on hold, this is probably a good time to be establishing the district with the least possible economic impact on current property owners. As you follow the contours of the proposed district in the map show here, its not always easy to follow the logic of why some structures are left in, others out, but as an expression of raw power the map is pretty clear. The boundaries are carefully drawn to leave Friedman's 501 N. Clark unencumbered by any protection.

Why is Friedman being allowed to demolish it? As George Orwell might put it, all property owners are equal---but some are 'more equal' than others.

Admittedly, Friedman has done some great preservation work in the past. But does that mean he has earned the demolition of 501 N. Clark? Absolutely not.

Especially because, if he gets to do this demolition, other properties will claim, in court, that they should get to demolition THEIR historic buildings.

Bottom line? Everyone should be treated fairly. And that means including 501 N. Clark in the district. Being fair includes doing what is fair for ALL citizens...and the citizens of Chicago deserve to have this part of their Central District protected. Property owners may not like it, but it is certainly fair.