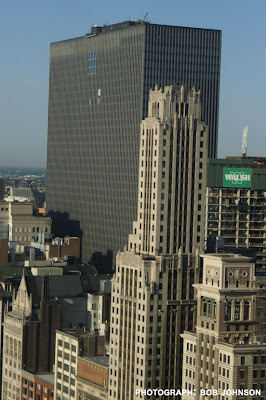 What can you about Mid-Continental Plaza, 55 East Monroe? That it takes up a full half city block, and has enough granite in its lobby and concourses to capsize an oil tanker? That its squat, closely spaced mullions rise the building's full 583 foot height without a single setback, giving the structure the appearance of a gigantic radiator or a maximum security prison, minus the charm?

One of the great glories of Chicago architecture, Shaw & Associates 1972 design definitely isn't, but, seeking to cash in on the renewed popularity of the east Loop with the advent of Millennium Park, the top 15 stories of the building are now being transformed into the "Park Monroe", ultimately projected to include almost 350 condo units.

As documented in these photographs by our intrepid photo correspondent Bob Johnson, Goettsch Partners is in the process of opening up the Mid-Continental's monolithic facade.

At first the only visible sign of the work was a cyclopean square of plywood at top center. 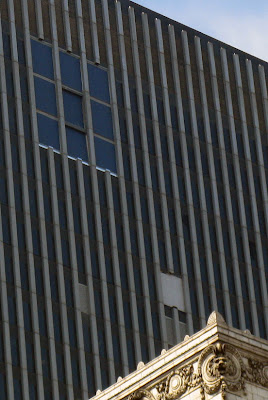 Now we're seeing Goettsch's dematerialization of the skin of the upper stories, stripping away the thick mullions which are wider then the structure beneath, which exists only behind every second column. A glass curtain wall, inset with terraces, is being put in their place. 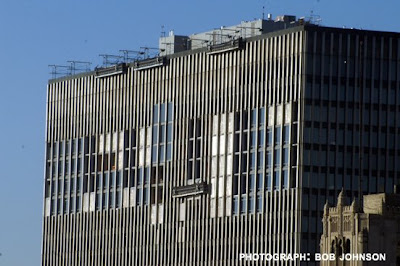 Lightening up the facade is especially important as the apartments, themselves, tend to be narrow shotguns stretching deep into the half-block wide interior. 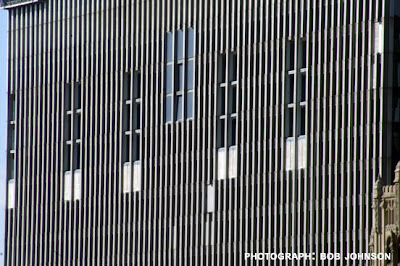 The final result will be a kind of stacked wedding cake, one where the edges of all the layers are flush. The Park Monroe will almost look like a separate building, perched atop an opaque, heavy -metal plinth. 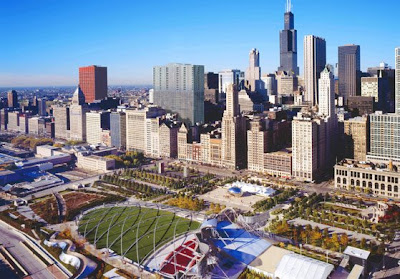 Thanks for the update, with pics. Wasn't it going to get an undulating roof? Have they done away with that?

That is truely horrific; doesnt anyone own businesses anymore that need office space downtown?

It's bad. Very bad. But a more fundamental issue is, views of Millennium/Grant Park aside, why anyone would purchase a unit. Deep shotgun apartments in a B- commercial building that is still predominantly commercial? A building on a busy Loop corner and whose long western elevation runs parallel to the L tracks? Crazy.

I guess 'cityofparis' has not been to the condos because they are some of the best in the city with by far the greatest views of any condos in Chicago and an amenity package that is second to none.

Agreed. I recently saw one of the units there. The views are spectacular. At $600-650/sf, it is a MUCH better deal than the majority of CBD condos recently constructed.