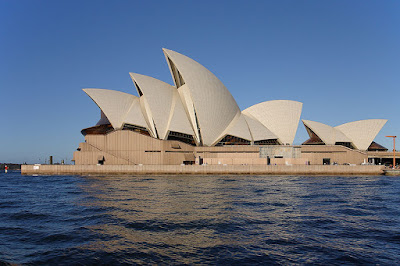 It's said that Mies van der Rohe had simply turned away when someone attempted to introduce him to Jørn Utzon, the Danish architect who in 1957, appearing seemingly out of nowhere, had just won the competition to design a new opera house for Sydney, Australia. Rudeness aside, the reaction was understandable. Not only was Utzon's visionary design a negation of Mies's entire aesthetic of design, but on the cusp of Mie's ideas gaining dominance over modern design (the Seagram Building wouldn't be completed until the following year), Utzon's spectacular liberation from Cartesian linearity was already indicating a means of escape. It may have taken decades for that escape to take hold, past the long dead-end of Post-Modernism, down to today's world of Gehry, Hadid, Koolhaas and Nouvel, but the writing was already on wall, in that preliminary sketch of a profile not flat, setback or ponderous, but a series of soaring, sail-like shells, inspired by the peeling of an orange, that if put back together would have formed a perfect sphere.

Cost overruns and government bureaucrats whose highest priority was deflecting blame (remember Richard M. Daley trying to deflect responsibility for all the cost overruns at Millennium Park on the Frank Gehry design which the mayor would so seamlessly reposition himself to embrace once the park opened in triumph?), resulted in Utzon leaving Australia and his dream project behind. His intentions for the interiors were severely altered by others, and of course when the result - and acoustics - were deemed a failure, Utzon, now conveniently in absentia, was the fall guy of choice.

In 1973, the Opera House, the new symbol of the city at the entry of its harbor, also opened in triumph, dedicated by Queen Elizabeth, to the thrilled approbation of huge crowds. Utzon had not been invited, nor was his name mentioned. It was not until a quarter century later that officials began consulting him on bringing the building closer to his original vision.

Utzon never went back, never saw first-hand the wonder he had created. In some ways, it's a bitter tale, but the one central, enduring truth is that Jørn Utzon created one of the most path breaking and inspiring structures in the history of architecture. The politicians who fought him fade fast in memory on their descent into oblivion; the Sydney Opera House designed by Jørn Utzon, who died today at age 90, as much as is possible with any work of man, is immortal.
(Click on time for permalink) 2:33 PM

Great "backstory" to an icon that many equate with "Australian Architecture"...

ACtually Mies met him the first time Utzon visited Crown Hall and it was only the second time, after the Utzon won the competition, an entry and result that Mies disliked and disagreed with immensely, that Utzon was told by Mies's secretary that he was too busy to see him.

More important than the anecdote is how Mies's world view informed his aesthetic and visual choices. Schulze's new take on this in his upcoming rewrite of the Mies biography will finally address this.

Thanks for the information.

I heard Franz Schulze and Edward Windhorst talk about the revision at the Arts Club a while back. At that time they were hoping for publication at the end of '07. Looking forward to reading this highly anticipated revision of an indispensable work.

This is the first time that I have read anything about who designed the Sydney Opera House.

The first thought that came to my mind was "What else did this guy design? Anything else spectacular?"

I am going to read about him.

He was my professor in Graduate School. I still recall his first lecture where he talked about the place I lived all my life in a manner that I had never seen before. Needless to say, I kept every sketch he did in our class.