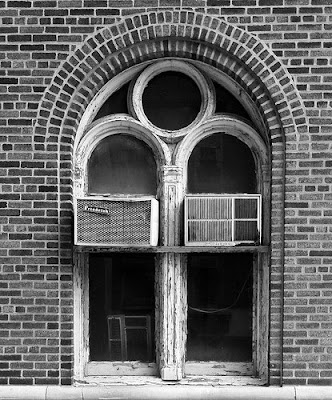 It was one of Chicago's greatest institutions. Now it's just in the way.

Lee Bey, on his Urban Observer blog, has posted a series of striking photographs - including the one you see here - of the Michael Reese Hospital complex on the city's near south side. The fact that they're in black and white makes Lee's images seem even more elegiac.

The story of the hospital, recounted in photoessays on the wonderful Forgotten Chicago website, is an object lesson in the dynamics of a city. It was originally created to replace a hospital created by the United Hebrew Relief Association at LaSalle and Schiller that had been destroyed in the Great Chicago Fire of 1871, funded out of the estate of Michael Reese, who had grown rich speculating in real estate in the 1850's, during the city's infancy. The hospital named after him, which opened in 1880, was to be free of the kind of prejudice that remained prevalent in other Chicago institutions, serving patients regardless of their race or religion. 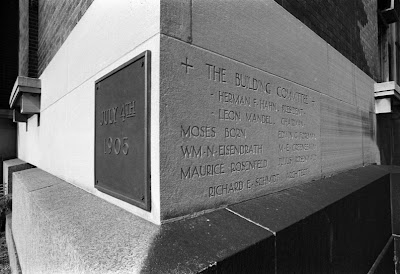 The eight men whose names are inscribed on the cornerstone, laid July 4, 1905 (shown above in a Forgotten Chicago photograph) formed the committee that had raised $400,000 for the new building designed by architect Hugh Garden, and including people like Moses Born, who had made a fortune in the clothing business and whose distinctive Frost & Granger designed house still stands on Drexel Boulevard. 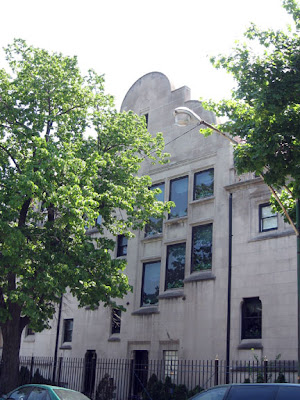 There was also Leon Mandel, co-creator of the now forgotten Mandel Brothers, at State and Madison, one of that great street's grandest department stores, so prosperous that the 1912 Holabird and Roche building spilled over to a classic Chicago School-styled annex on Wabash. Long past its the death of its creators, Mandel Brothers failed in the 1950's and was sold to Wieboldt's, a lesser chain that failed, in its turn, the 1970's. The great State Street palace, its original terra cotta storefronts reproduced in fiberglass but shorn of its ornamental cornice, now houses outlets of Filene's Basement and T.J. Maxx. 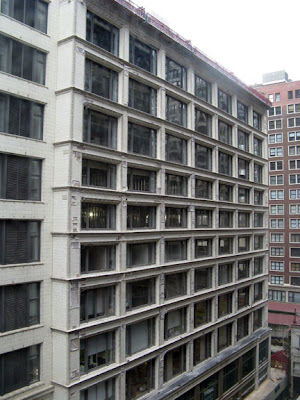 There's Julius Rosenwald, who helped make Sears, Roebuck, now a division of K-Mart, a national powerhouse, and who would also go on to found the Museum of Industry and fund the 1929 Rosenwald Apartments at 46th and Michigan, one of the city's first and best low-income housing complexes, now boarded up and rotting. 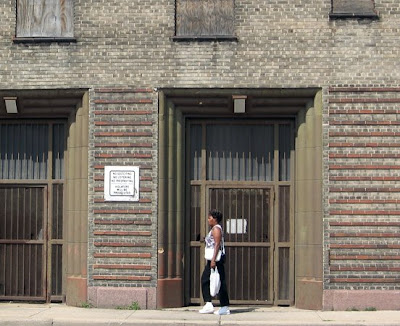 William M. Eisendrath made his fortune in tanning and leather goods, Herman F. Hahn in wholesale jewelry, Maurice Rosenfeld from dry goods and real estate, Edwin G. Foreman, whose name lives on in Foreman High School, in banking, as did M.E. Greenebaum.

Michael Reese was one city's jewels, a medical facility whose innovations including the use of incubators for babies born prematurely. As the century progressed, Michael Reese continued to serve the neighborhood around it as its constituency shifted from Jewish to Afro-American. The area became increasingly poor, and the response was the standard response of the 40's and 50's. As at IIT, it was a scorched earth approach, razing the existing, decaying built environment to create a empty tabula rasa for an idealized new Corbusian environment of buildings constructed in a broad expanse of greenery and, increasingly, parking lots.

Over time, the focus of philanthropy moved elsewhere, the neighborhood continued to deteriorate, and in 1998 Michael Reese got sucked up in the pervasive supply chain economics of our era, becoming just another cog in the vast empire of Nashville's Hospital Corporation of America. After a few years it sold Michael Reese to still another faceless corporation, Envision Hospital Corporation of Arizona, which pushed the hospital into bankruptcy court this past September, with up to $100 million in debts.

Now the city lusts after the 37-acre complex as an off-again, on-again site for the mayor's great white whale of the 2016 Olympics, as a part of a $1.1 billion village for the athletes. The hospital is in the process of closing, not with a bang, but with a whimper. In July, the city crafted a deal to pay the owner of the land, Medline Industries, $85 million, with Medline immediately kicking back $20 mil to remediate toxic waste contamination on the site. That deal fell apart as estimates of the actual cost of the remediation began to skyrocket, to $32 million and counting. Now the city may invoke its eminent domain powers to acquire the property, and is set to the borrow $85,000,000 to complete the acquisition. And all traces of Michael Reese will be erased from the earth.

Why not selectively rehab the best archiecture on the site, which contains many excellent examples of modernism along with the Garden designed hospital, and build the athletes housing around them. This would be much greener than demoing everything.

Who knows where to download XRumer 5.0 Palladium?
Help, please. All recommend this program to effectively advertise on the Internet, this is the best program!