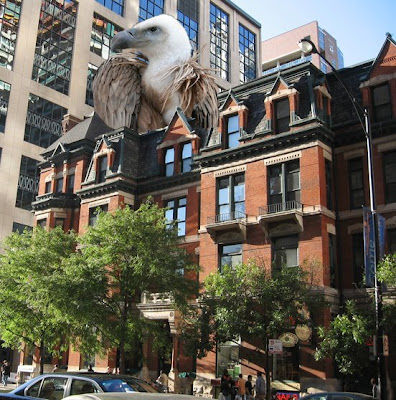 In 2007, the preservation group Landmarks Illinois presented 115 year old Chicago real estate firm Draper and Kramer with an award for its "restoration and preservation accomplishments throughout the City of Chicago." Yet over the last decade, one of Draper and Kramer's most senior executives, Vice President Albert Hanna, has waged a relentless campaign to destroy the city's power to protect Chicago's irreplaceable architectural heritage through the landmarking process.

On Friday, Hanna scored a major victory. As reported this afternoon by Crain's Chicago Business, a three judge panel of the Fifth Division of the 1st District of the Illinois Appellate Court, which covers Cook County, ruled the Chicago Landmarks Ordinance, which has withstood all legal challenges since 1968, is invalid, sending Hanna's case challenging it back to the Cook County Circuit Court. According to Crain's, the ordinance will remain in effect until the case faces its final resolution.

The court ruled the ordinance unconstitutional because it found the seven standards used to determine whether a building qualifies for landmarking are too vague. You be the judge:

Criteria for Designation of Chicago Landmarks
A. In considering a building or district for potential landmark designation, the
Commission on Chicago Landmarks (a nine-member board appointed by the Mayor) is limited in its consideration only to the following seven criteria, as established in the Municipal Code of Chicago (Sect. 2-120-620):

1. (Critical Part of City’s Heritage) Its value as an example of the architectural, cultural, economic, historic, social, or other aspect of the heritage of the City of Chicago, State of Illinois, or the United States.

2. (Significant Historic Event) Its location as a site of a significant historic event which may or may not have taken place within or involved the use of any existing improvements.

3. (Significant Person) Its identification with a person or persons who significantly contributed to the architectural, cultural, economic, historic, social, or other aspect of the development of the City of Chicago, State of Illinois, or the United States.

4. (Important Architecture) Its exemplification of an architectural type or style distinguished by innovation, rarity, uniqueness, or overall quality of design, detail, materials, or craftsmanship.

5. (Important Architect) Its identification as the work of an architect, designer, engineer, or builder whose individual work is significant in the history or development of the City of Chicago, State of Illinois, or the United States.

6. (Distinctive Theme as a District) Its representation of an architectural, cultural, economic, historic, social or other theme expressed through distinctive area, districts, places, buildings, structures, works of art, or other objects that may or may not be contiguous.

7. (Unique Visual Feature) Its unique location or distinctive physical appearance or presence representing an established and familiar visual feature of a neighborhood, community, or the City of Chicago.

A potential Chicago Landmark must meet at least two of the above landmark criteria.

Yet the court said, “We believe that the terms ‘value,’ ‘important,’ ‘significant,’ and ‘unique’ are vague, ambiguous, and overly broad." To anyone who attempts to evaluate art, these terms are anything but vague - they are indispensable. The ruling may be less a matter of good law than a commentary on the corrupt system that Illinois uses to select judges.

Although the Crain's report describes the ruling as coming from a three judge panel, the website of the Illinois court system actually lists four jurists for the Fifth Division.

Two of them, Margaret O'Mara Frossand and Michael P. Toomin, have consistently been rated from "Qualified" to "Highly Qualified" by the various groups evaluating judges seeking election.

The other two, however, are poster children for Cook County's politically compromised judiciary. As recounted by the Chicago Council of Lawyers, John P. Tully, whom they called "an embarrassment to the Illinois bench," was charged with seven counts of misconduct in 1990 for such deceptive campaign tactics as running ads calling himself "Highly Qualified and Endorsed" despite the fact that every major bar association found Tully "Not Qualified." According to the Council, Tully said he was "Highly Qualified" because he felt he was highly qualified and that he was "Endorsed" because voters cast ballots for him.

The ruling overturning the Landmarks Ordinance was written by James Fitzgerald Smith, who the Council has consistently found "Not Qualified", saying, "Lawyers report that he is extremely pro-landlord in his duties" and that his "lack of fairness and respect for the rule of law render him not qualified for election to the Circuit Court." According to the Chicago Reporter, in 2002 Smith received "not recommended" or "not qualified" ratings from seven of the 12 Chicago area bar associations. According to the Chicago Reporter, the Sun-Times reported that Smith lost an 1992 election as "James G. Smith", but won in 1994 running as "James Fitzgerald Smith."

The implications of the ruling remain unclear. Crain's quotes a Chicago Law Department spokesman as saying, barring a reversal, sending the case back to Circuit Court may effectively invalidate the landmarks ordinance. The spokesman says the city is "considering" appealing the decision to the Supreme Court.

The Trib's Blair Kamin has a long post where he begins by deriding the Crain's report as "a grotesque exaggeration" but then concedes the story's importance by launching into an extensive refutation of the primary claims of the ruling, which he calls "a dagger at the heart of Chicago's landmarks law and measures like it around the nation."

Surely, the ruling has left many developers salivating over the prospect of eviscerating perhaps the strongest check on Chicago's corrupt zoning appeals system, where the law applies only to the suckers unable to hire one of the city's politically connected zoning lawyers. (viz. James J. Banks, who just happens to be the nephew of Zoning Committee Chairman alderman William Banks.)

Crain's quotes the dean of zoning lawyers Jack ("no one comes to Chicago to see short buildings") Guthman, the legendary, high-powered attorney who recently announced his retirement, as saying the ruling leaves all of Chicago's landmark areas vulnerable. "They are all compromised," Guthman says, whether in despair or scarcely concealed glee is not reported.

Local preservationists are refusing to panic. "We have talked to some legal people who know this case" Landmarks Illinois President Jim Peters tells Blair Kamin, "and they have said that technically [the ruling] doesn't invalidate the landmarks ordinance"

I was just going through our feed list and saw your headline.

We went through something very similar here in LA, and I hope some court in Illinois will overturn this ridiculous ruling.

I'm including a link to your post in our Monday posting, because I want as many people as possible to realize that no landmark is EVER safe.

To explain the January 30, 2009, Illinois Appellate Court ruling in the case of Hanna v. City of Chicago as the byproduct of a “corrupt” system used in Illinois to select judges is a non sequitur. If the substance of a legal decision is going to be analyzed and discussed, legal analysis, and not boogey man diversionary tactics, should be utilized. The article, which purports to explain the rationale and implications of the decision, is devoid of any sort of legal analysis.

The real failing of the article, however, is not the ancillary opinion and information regarding the judge selection process. The article’s weakness is a misconception of what defines the constitutionality of a legislative enactment. This is encapsulated in the statement that “[t]o anyone who attempts to evaluate art, these terms [“value,” “important,” “significant” and “unique”] are anything but vague – they are indispensable.” The pervasive quality of art evaluation is subjectivity. Ordinances, which are “vague, indefinite and uncertain that men and women of ordinary intelligence must necessarily guess at their meaning and differ as to their application” (i.e., subjective), are unconstitutional. Thus, to liken enactments pursuant to the Chicago landmarks ordinance as art evaluation only supports the Appellate Court’s ruling.

So let me get this straight.

Judges dealing with forty years of court challenges to Chicago's and other landmark ordinances leading all the way up to Supreme Court who found those terms more than adequately precise were all idiots, but two unqualified hacks who wouldn't have gotten anywhere near a bench if it weren't for their political connections who suddenly decreed those terms "vague" are the wise men? Oh, and pointing this out is a "non sequitur" to a discussion of the ruling?

P.S.: follow the link to Kamin's piece to read a more detailed legal analysis of the flaws of the ruling.

The National Truts for Historic Preservation reports on the matter: