Chicago and its Architecture Through the eyes of Google Books 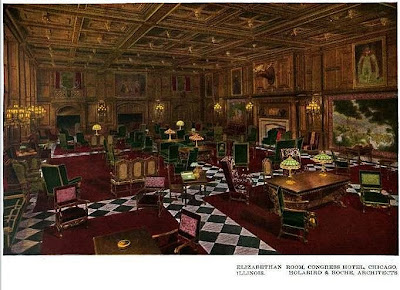 One of the great research tools of our time is the Google Book Search project, which has made over a million books available in full-text scans, fully-searchable, and usually downloadable as (non-searchable) pdf's. The project has been controversial because of copyright issues, but perhaps the greatest value of Google Books is its treasure trove of out-of-print, out-of-copyright titles.

In terms of architecture, Google's agreement with the University of Michigan, including its school of architecture, has been especially rich in results. Here are just a few titles I've recently come across:

History of the Illinois Central Railroad Company - an exhaustive in-house history, from 1900. of the railroad that, probably more than any other, shaped Chicago and its lakefront

The Official Guide to the World's Columbian Exposition - offers up an exhaustive overview of the 1893 fair. The 50 cents general admission got you into pretty much everything in the fair proper, but to take in all the attractions on the famous Midway just outside the grounds would set you back a whopping $13.00.

Chicago and the Great Conflagration - an astounding work by Elias Colbert and Everett Chamberlin that not only offers up a massively detailed account of the 1871 Great Chicago Fire published less than a year later, but an exhaustive account, rich with particulars and statistics, of Chicago's history to that point. (We learn, for example, that in 1837, the year of the city's incorporation, Chicago was still very much a frontier town, with adult males outnumbering females by a factor of over 2 to 1. The new "city" had a grand total of 492 buildings, with a total evaluation of $236,842, and a total tax levy of $5,905. No TIF's)

Some Chicago Buildings, Represented by the Work of Holabird and Roche, from the April, 1912 Architectural Record, authored by Franz Winkler.

The overview is generously illustrated, including the photos posted here. I had always known that Chicago's most famous department stores - Burnham's Marshall Field store, Sullivan's Carson, Pirie Scott, and the Boston Store (now Sears) - had been built in stages, but I was unaware that the same was true of other great Chicago department stores, now forgotten. 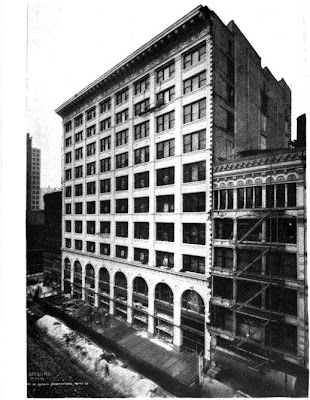 When you look at the former Goldblatt's, former Rothschild store on State Street, now DePaul Center, it looks like a single building, but it was built in stages. 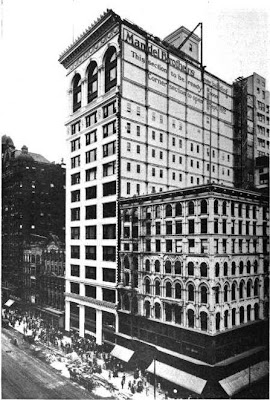 The same was true about the Mandel Brother's store, later Wieboldts, at State and Madison. The advantage was obvious. Business could continue in the older store, pictured to the right, while the new store was being constructed. Once the new tower was completed, the old store at the corner was demolished for another tower mirroring the first, resolving in appearance as a single building.

Finally, from still another Google Book, here's an under-construction view of William LeBaron Jenney's New York Life Building, subject of a long landmarking fight that dragged on until the developer obtained the right to build a new tower that will demolish the back end of Jenney's design. 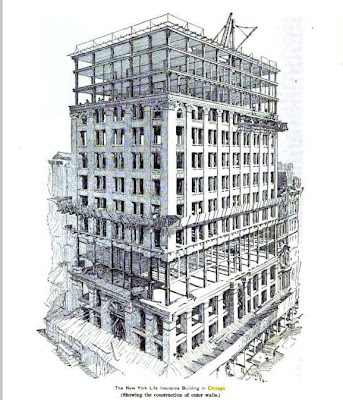 For scholars - and dabblers like myself - the Google Book project is an invaluable resource.

Lynn, thanks for the tip about the Google Book Project.

I just spent the last half-hour skimming through a few of the many books on Chicago that are available. It's great!