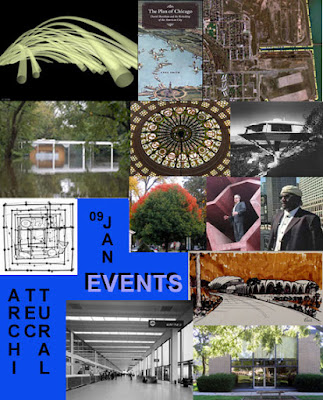 The holidays are over, the real world again asserts. And the rich selection of architecture-related events in Chicago again ramps up, with over three dozen items on the schedule for January.

There are new exhibitions on Hedrich Blessing's photographs of O'Hare, at CAF, with a curator talk by Charles Waldheim, and a discussion of a half century of Murphy/Jahn work at the airport by the firm's Tom Chambers. There's Mid-Century Modern Design Drawings at ArchiTect Gallery, and an interactive installation and exhibition of the work of Jimenez Lai at the Extension Gallery. AIA covers the restoration of the Cultural Center's Tiffany Dome, and SEAOI takes on the Structural Engineering of Power Plants.

Keith Besserud explains SOM's Blackbox Group's exploration of forces and form, also at AIA. APA takes on trees. There are lectures by Carl Smith at AIA and Jill Van Newenhizen at the Chicago History Museum marking the 100th anniversary of the Burnham Plan. CAF has a new film on the life and work of John Lautner. On the Mies front, Gunney Harboe discusses restoring the Robert F. Carr chapel at IIT, for CAF, and Whitney French talks about flooding at Farnsworth House for Landmarks Illinois. There's a new film on Herzog and de Meuron's Beijing Bird's Nest, at the Gene Siskel. And . . . as the story goes . . . much, much more. Check out all the events on the January calendar here.