Transparency Comes to Washington - via Krueck and Sexton 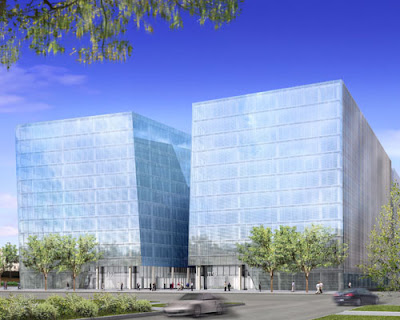 The Architectural Record has a nice article by Zach Mortice on NoMA Square 73, a handsome Tishman Speyer office complex designed by architects Krueck and Sexton. In a town known for classical architecture and lots of granite, NoMA's 12 story towers, at 1100 First Street, NE, are clad in glass. The first of towers, now nearing completion, angles outward as it rises, re-animating the basic glass box by stretching the top corner away from the standard right angle. Mirrored by a twinned second building to come, the two towers, according to Mark Sexton, will impart a sense that they "orbit each other." You can see a lot more images on the Krueck & Sexton website here. (It's Flash, so navigate to Current/Projects/NOMA.) 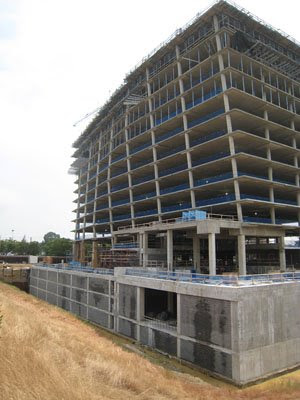 The project is about a mile north of the U.S. Capitol, and a block from the tracks that lead into the Daniel Burnham-designed Union Station. It lies within what has come to be known as the NoMA Corridor, 5o city blocks of largely undeveloped land that is to projected to eventually include over 16,000,000 square feet of new office space. (NoMA, by the way, refers, not to an aversion to motherhood, but to "North of Massachusetts Avenue.")

NoMA Square 73 also presents a stark contrast to its neighbor, the hunkered-down new 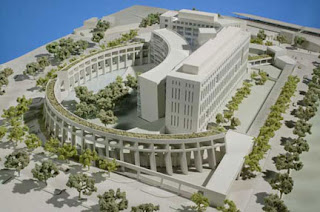 headquarters for the Bureau of Alcohol, Tobacco and Firearms, designed by Moshe Safdie in compliance with guidelines created after the 1995 destruction by car bomb of the Alfred P Murrah Building in Oklahoma City that resulted in 168 deaths. As we've written previously, the BATF's "curtail wall" is of concrete so thick engineers had a hard time finding a place to put the plumbing and wiring. A 30 foot high concrete screen curves around two sides of the building. The BATF was a monument to fear. Let's hope NoMA Square 73 is a sign that we've resolved, without compromising our resolution, to finally crawl out of the bunker. 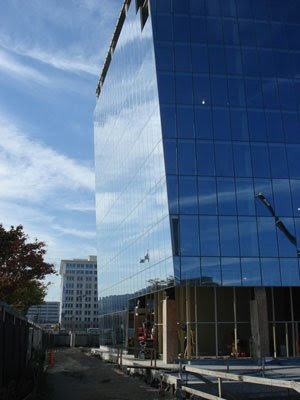 Krueck and Sexton may be building an ongoing D.C. presence. Blair Kamin reported in December that the firm has also been named finalists, in a field that includes Frank Gehry, in a competition for the design of a Dwight D. Eisenhower Memorial, just south of the National Mall. You can see the site on Krueck and Sexton's website here.

Dull and uninspiring. Looks like a suburban office park.

I think tilting the building planes and claiming that they are "orbiting" each other is just "starchitect speaks"..well on their way to stardom!