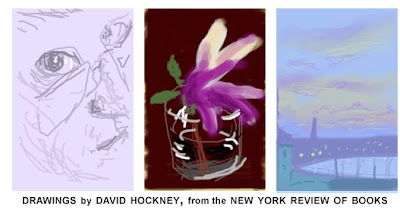 The October 22nd New York Review of Books contains a fascinating article by Lawrence Weschler on how famed British artist David Hockney has returned to painting - on his iPhone. He's had an iPhone for less than a year, but while using it as a research device, he stumbled across an app called Brushes, which allows an artist to create striking images using only his or her fingers. Except Hockney doesn't - he creates all his iPhone art using the pad of his thumb. "Only the thumb," says Hockney, "has the opposable joint which allows you to move over the screen with maximum speed and agility, and the screen is exactly the right size, you can easily reach every corner with your thumb." This is, of course, rank speciesism, discriminating again the thousands of other animals, doomed by their physical structure never to create great iPhone art.

Hockney is far from alone. Earlier this year, Jorge Colombo's cover for the June 1st issue of The New Yorker was entirely created on an iPhone using the Brushes app.

Are we at the dawn of a new age of art? No longer does the artist have to carry around notebooks, brushes and pastels, and hire a flunky or enlist a groupie to carry around an easel. Anytime, anywhere - just pull out the old iPhone and start creating. It can even come with its own tiny easel.

Andy Warhol mass produced pieces of arts that sold for millions. Will the iPhone usher in a more democratic replacement, where anyone can download an original piece of art from the App store? (Future news story: Apple Computer is in heated negotiations with a consortium of the world's most prominent artists over pricing on the iPhone Art Store. Artists are looking for a variable pricing based on differential value, up to a potential maximum of $14,000,000 for the most distinctive and coveted works. Apple is holding firm to its current standard price of $1.99.)

Hockney sees a continuity in iPhone art going all the way to prehistory. "People are always asking me" he tells Weschler, "about my ancestors, and I say, Well there must have been a cave painter back there somewhere. Him scratching away on his cave wall, me dragging my thumb over this iPhone's screen. All part of the same passion."

You spelled David Hockney's name wrong in the caption.

And just to be consistent, I misspelled it in the text, too! My readers are my only editors. Thanks for the catch.