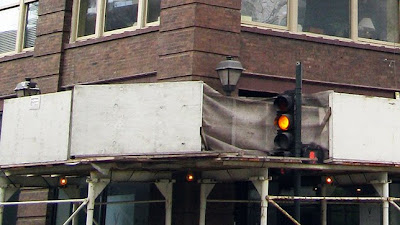 At times during the past decade, especially after falling terra cotta led the city to make building owners step up facade inspections and repair, it seemed as if half the sidewalks in downtown Chicago were covered in ugly scaffolding, forcing pedestrians through dark cages of metal bracing topped off by cheaply painted plywood. 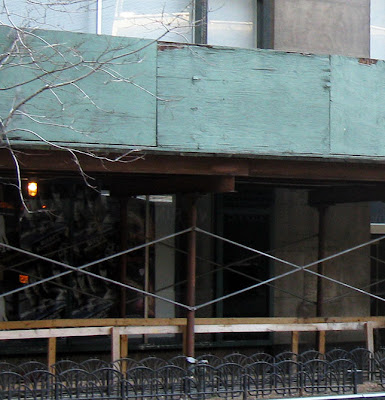 Because they're often in place for years at a time, many become derelict presences, with flapping plastic and cracked, peeling paint. As necessary as they may be, scaffolds slum up streetscapes and cheapen the experience of the city, often in a way not even a crumbling building can match.

"Walking on the sidewalk shouldn't be an ominous adventure, but it is." Those were the words of New York City Planning Comissioner Amanda Burden at a press conference 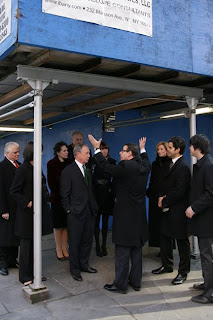 this past Thursday unveiling the winner of the urbanShed international design competition "to conceptualize a cutting-edge sidewalk shed to protect pedestrians, improve the pedestrian experience– and make New York City even more attractive for generations to come."

Sidewalk sheds are what we just call scaffolding. There are more than 6,000 of them in New York City, spanning in excess of a million linear feet. On one prominent street, 30% of the sidewalks were covered.

The competition received 164 submissions from 28 countries. The blue ribbon jury included not only Burden, but also NYC Buildings Commissioners Robert D. LiMandri and architects David Childs, Ada Tolla, Jean Oei and Craig Dykers, among others. Brief requirements included the ability to support a minimum of 300 pounds per square foot, sustainable materials, graffiti-resistant, and economical in both installation and maintenance. You can see all three finalist entries here.

The winning entry in the competition came from Young-Hwan Choi, a 28 year old student from t 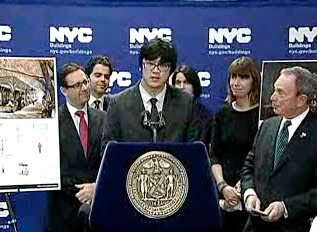 he University of Pennsylvania School of Design, who received $10,000. At Thursday's press conference, New York mayor Michael Bloomberg claimed that the cost for installing Choi's design will be no more than that for current sheds, with maintenance costs actually being lower. The use of the design will not be mandated, but Bloomberg expected it would be adopted because of the advantage to store owners. Currently, "When a shed goes up on the sidewalk, it hurts their business." 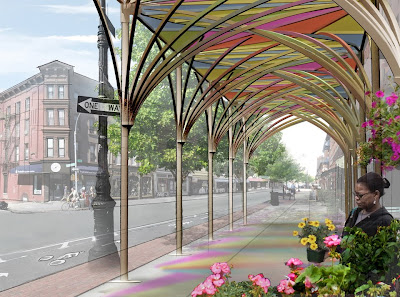 Choi's design not only is a major improvement aesthetically, but it eliminates the gloom of current sheds by bringing in much more light, and makes navigating around the scaffolding much less onerous. "No cross members to block you," said Bloomberg.

The Alliance for Downtown New York will bankroll the installation of a full-scale prototype at a landmarked 1846 building at 280 Broadway in lower Manhattan that was originally the "Marble Palace", the A.T. Stewart store often cited as the first department store in the United States. Later the structure became the home to both the New York Sun and A.T. Stewart department store.construction site in Lower Manhattan. Currently, the building is city-owned, housing the Buildings Department. 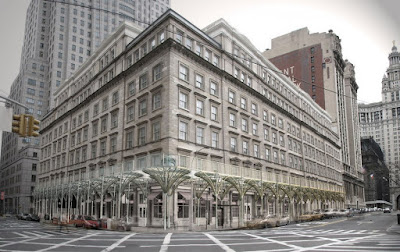 Back in Chicago, with the winding up of the last great construction boom, our own supply of sidewalk sheds appears, thankfully, to be in decline. A good time to take a long, hard look at Chicago's ugly scaffolds, and at the urbanShed competition. Will Choi's design work as advertised, at the promised cost? Let's call on Chicago's own architects and designers to come up with alternatives that can avoid turning the city's streets into dark, dispiriting dungeons the next time construction revives. 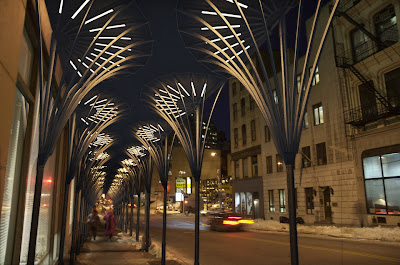 Chicago is getting toasted by NYC and others in the design of its public spaces. This is just the latest example. For more of them, you can see:

Why do we need to get designers and architects to come up with our own Chicago version? Why don't we use this one that you have introduced here? Or at least wait to see how it works?

I already raised the question or workability and cost of the Choi design.

It's a big problem. Should there be only one answer - the first to be proposed?

It may take a while to resolve the question on New York's prototype. Why not keep thinking in the interim? Whether Choi's design works, or whether it doesn't, we should be learning from it, and improving on it - not using it as an excuse for inaction.

the City of Chicago has a multitude of opportunities where it can solicit ideas from its design community but it seems like they have no idea where to take them. It takes just as much vision to incite these kinds of public works and I really wonder if the person or persons within the city's power structure have what it takes to pull it off. If it's anyone at the three-ring circus in the Santa Fe building, we're screwed.

I would like to see the cost and see a Pipe scaffolding system on top,
also it does not seem to have way to comingle with the current system
it has no "spread load design"
its cost is going to be 10 Times that of the current on which cost $150 per linear foot for standard Shed,

Estimates, I've seen reported that these canopies are projected to cost 20% less than the existing NYC canopies.