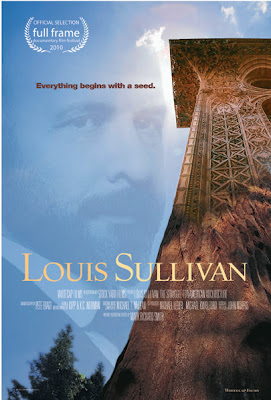 Earlier this month, the film had a preview that filled both theaters of the Gene Siskel Film Center. Smith has created a clear, streamlined narrative that eloquently captures the triumphs, tragedies and conflicts of Sullivan's work, life, and thought.

For those who have read any of the biographies of Sullivan, the film covers familiar ground. At a question and answer session after the Chicago screening, Smith, soeaking not just as the director, but as a gay man, himself, responded to a question asking why the film didn't deal with the issue of Sullivan's sexuality . . .

It's a tricky area because like everything connected with his personal life, which is rather vague, in a lot of ways, I as a filmmaker was really limited in what I could really assert without derailing the story, which for me was all about his work and his aesthetic reaction to the world around him. Which I think when you really get down to it doesn't have a lot to do with your sexuality. Your sexuality, the conflicts you have made, draw you to a certain kind of expression , a certain vehemence about it. This is really the first time anyone has treated Sullivan in his entirety as an artist. 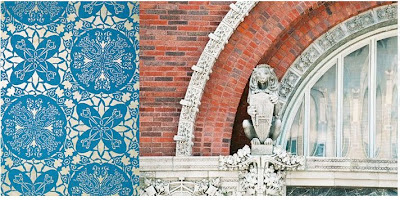 The film includes extensive interview segments with Sullivanistas such as preservationist Gunny Harboe, biographer Robert Twombly, authors Lauren Weingarden and Joseph M. Siry, (whose The Chicago Auditorium Building is the Tolstoyan epic of architecture and social forces converging and exploding in late 19th century Chicago), and Chicago Cultural Historian Tim Samuelson, whose long-awaiting show on Louis Sullivan is rumored to be opening in June.

The original score was described by its composer, Michael McLean as a "very eclectic score, it was very fun to write." McLean demonstrated the workings of the score at the Gene Siskel's piano, saying that, just like one of Sullivan's heroes, Richard Wagner, he used leitmotivs. "There's one melody in here that was the one that's the young Louis Sullivan, and as he gets older, he's disillusioned, he's bitter, you can take that melody as young man and turn it into . . . " and here McLean played the audience the same theme, now tinged with the unresolved sadness of the minor mode. "No one thinks of that intellectually, but it affects you at a very deep emotional level and that's what Louis Sullivan's architecture and ornamentation does."

The otherwise capable score includes one major miscalculation. As the camera reveals Adler and Sullivan's astonishing Auditorium Theater, the soundtrack bursts forth with Siegfried's Funeral March, music that screams "look how impressive this is!" with a feudal morbidity and heavy-handed sense of doom that is the very antithesis of Sullivan's graceful triumph.

As with Judith Paine McBrien's fine documentary from last year, Make No Little Plans: Daniel Burnham and the American City, one of the pleasures of the film is to rediscover all of those graphics and photographs we've seen, faded and murky, in books down through the years, cleaned and polished to a pristine condition that makes them things of newborn wonder. 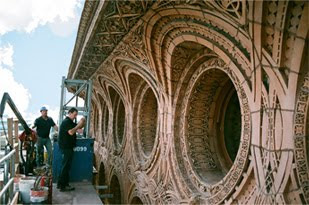 Other than director Smith, the real star of Louis Sullivan is cinematographer Peter Biagi, whose camera glides over and through the architecture and ornament as if making love to it. Using special cranes and just plain skill, Biagi gives the audience what, short of experiencing it first hand, is possibly the most complete expression of the stunning beauty that arose out of Sullivan's fertile imagination. This is a film worth watching for, to see it in a theater, where the scale of the images brings you closer to what encountering the work is really like.

Ultimately, only a great novel could do Louis Sullivan full justice, one that took full advantage of authoritative license to try to get a handle on the great architect's inner life. Mark Richard Smith, in concentrating on the work and the public record, has perhaps done the next best thing: tell a story that is, at once, inspiring, tragic and moving, propelled by art whose inimitable quality and unique achievement has kept the story of its creator - and the questions he raised - compelling down to this very day.

Mark Richard Smith talks about the challenges of filming Louis Sullivan: The Struggle for an American Architecture and the decision to use a female voice to read from Sullivan's writings.