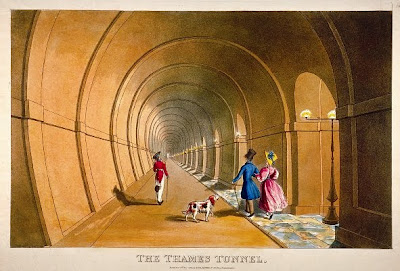 Earlier this month, as reported by the Art Daily Newsletter, London residents had a last chance to tour what was described at its opening, over a century and half ago, as The Eighth Wonder of the World: the 1,300 foot tunnel beneath the Thames, using revolutionary new tunneling technology developed by French-born engineer Marc Isambard Bruneil. The Thames Tunnel took over 40 years to finish, and created a sensation. A week after its opening, more than half of London, including Queen Victoria, Prince Albert, and the poet Byron had paid a penny a piece to stroll along its gaslight arches.

Completed at a cost of £634,000, (one 1843 pound would be worth about 44 today), it never turned a profit. even as it remained a popular attraction, with the spectacular entry pavilion you see above, and later additions of a shopping arcade, pipe organ, theater, fortune tellers and dancing monkeys - "all sorts of contrivances to get your money," in the words of a contemporary observer. It also became known as a favorite prostitute's haunt and a good place to get mugged. In 1865, it was purchased by the East London Railway, and eventually became part of the London Underground. It is scheduled to again serve the East London extension later this year.

As we approach April's fool day, the contemporary illustrations of the tunnel are so fantastical that you'd be forgiven if you thought it was a urban legend. But it wasn't. 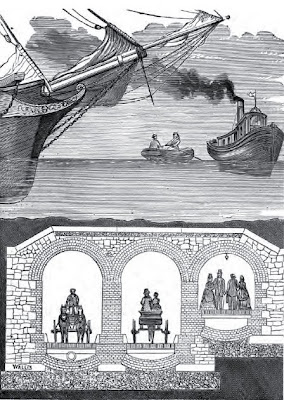 There were several great tunnels dug under the Chicago river, including the one at LaSalle Street, whose cross section is depicted above. 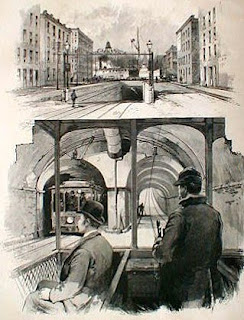 The first, 1,600 feet long, under Washington street, opened in 1869; the second, 1890 feet under LaSalle, opened in 1871 at a cost of $566,000, just in time to serve as a major lifeline to the frenzied crowds fleeing the Chicago fire after the wooden bridges had burned and collapsed.

Originally designed for pedestrians and private vehicles, they were turned over to the cable car companies, run by the ultimately infamous Charles T. Yerkes, in a midnight vote at a July, 1886 session of the Chicago City Council, that was euphemistically described by the New York Times as "prolonged and exciting."

There was no Vrdolyak or Burke, or Dick M 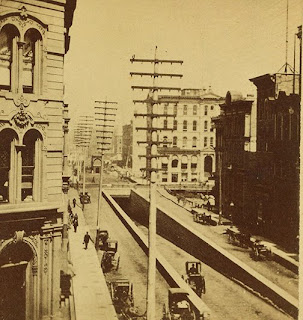 ell jumping up on a table, but local papers intimated that boodle was flowing freely to aldermen in Yerkes 'pocket. The annual rental fee of $20,000 was cut in half by an ordinance pushed by that era's representative from the Cullerton family, providing a $10,000 credit reimbursing Yerkes for the cost of paving and lighting the tunnel. The Chicago Daily News described the original ordinance as "having been amended so as to practically make the tunnel a present to Mr. Yerkes."

Cable car service in the tunnel continued until 1906. Originally the tunnel was 18 feet below the riverbed, but when the Chicago river was reversed, the dredging of the river exposed the tunnel's top. 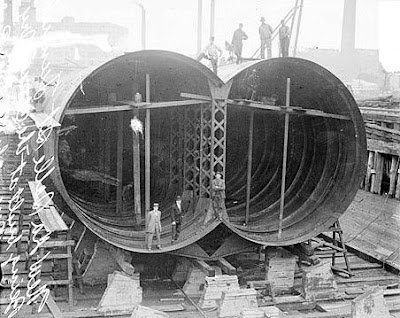 A wide, deeper replacement was manufactured on Goose Island out of steel plate, floated down the river and lowering into a trench in the riverbed. 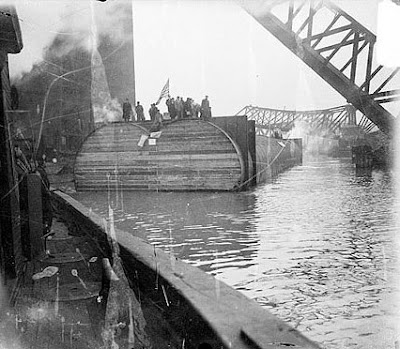 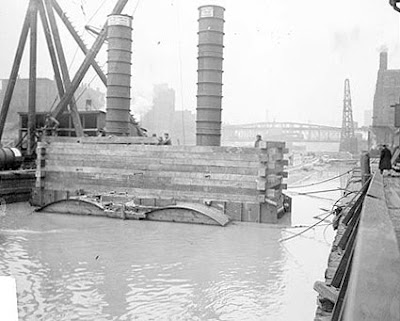 Completed in 1912, it now served the city's streetcars. It remained in use until 1939, when it was walled up as the Dearborn Street subway was constructed.

There was one at Van Buren, too. Am I to understand the tunnels themselves were never dismantled?

one account i came across said the tunnel was walled up and filled with damp sand. no mattresses, apparently.

The portal on LaSalle is actually not part of the river tunnel... the tunnel portal was actually one block north at Hubbard. The current postmodern portal was built in the early 90s to allow cars to access Carroll Avenue.

funny, I just put together this piece on Yerkes (Among other things) last week.

All three tunnels still exist. See http://www.encyclopedia.chicagohistory.org/pages/1275.html Before 9/11 there was occasional talk of using the one near Van Buren as a walkway from Union Station to Sears Tower. The west portal to the Washington tunnel was still visible under North Western Station until the late 80s.

As Roland noted, the LaSalle portal is not a remnant of the river tunnel, but was built when LaSalle finally got a bridge and was widened in 1927.

Roland S is correct. I have been in the LaSalle Tunnel, which runs from north of Kinzie to just south of the Blue Line tunnel at Lake St.