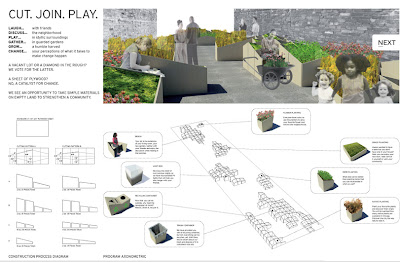 MAS Studio has won Architecture for Humanity Chicago's Street Furniture competition. Their entry, Cut.Join.Play "wowed the judges" from the School of the Art Institute.

Honorable mentions were given to Brenna Martin, for Rocking Stable, shown below, and Ross Atkin and Isabel Lizardi with Seeded. 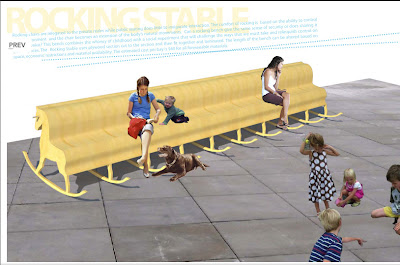 AFH Chicago also announced that they're entering a partnership with Archeworks to actually fabricate and install MAS Studio's entry as part of the school's +space initiative.

You can see more images from the winning entries and finalists - as well as, eventually, all of the entries - on AFH Chicago's website here. 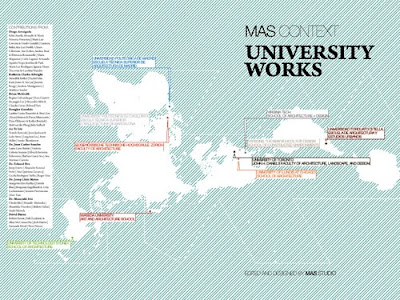 MAS Studio has also just published the latest version of its quarterly journal, MAS Context. Titled MAS Context University Works, it "elates some of the most promising architecture work developed in universities around the world during the recent academic years" and can be viewed and downloaded here.

The wining entry is germane to your thoughts about elevated public landscapes communicating inaccessibility to the public. By extension, would you argue this project would be more successful if those planters were stuck at 0'-0"?

This was a competition for street furniture, not landscaping, so it's understandable that the setting the architects made is flat, gray and neutral, the better to show off their work.

When they talk about transforming a vacant lot with limited funds, the operative question would be what is the most workable, economically viable starting point, which I doubt would be paving everything over flat and just plopping some planters on it. What seems to be suggested is bringing this furniture to an otherwise unfinished landscape, which would be a definite improvement.

Note also that this is a matter of scale. Mas Studio's furniture is humanly scale, with the seating placed within the planting, quite different from a deadening, 10 to 20 foot diameter berm whose only interaction with visitors is to allow them to sit along its outermost edge.

Thanks for your response. ...Very interesting.