Yeah, it's all good clean fun until the thing breaks loose from its moorings and starts stomping through the center of the city 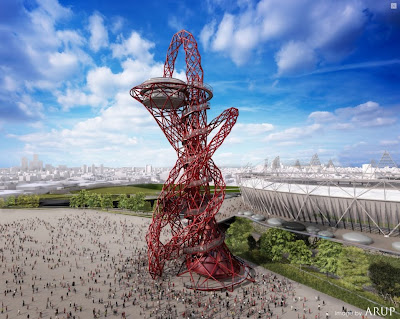 Sculptor Anish Kapoor may have designed the iconic Cloud Gate for Millennium Park in Chicago, but even with all his time here the whole "less is more" thing clearly never quite took hold.

Above is Kapoor's latest creation. 377 feet tall - higher than the Statue of Liberty, pedestal and all. What it lacks in height, compared, inevitably, to the Eiffel Tower, it makes up for in audacity. A "continuous looping lattice of tubular steel," designed with the connivance of super-engineer and regular Kapoor collaborator Cecil Balmond, it's to be the symbol of the 2012 London Olympics. (Can we begin a pool now on whether it gets finished in time?) It will stand next to the Populous/Peter Cook Olympic stadium and close enough to Zaha Hadid's sweeping Aquatic Center to poke it in the eye. Kapoor said his work represents the dynamism of a city coming out a recession.

A steal (steel?) at $29,000,000, most of the funding - and the 1,400 tons of steel - will come from Lakshmi Mittal, founder/CEO of global steelmaker ArcelorMittal, whose personal net worth of somewhere around $19 billion should come in handy when the cost overruns come calling.


Branding is already in place. The creature's name? The ArcelorMittal Orbit. Attorneys for Mars Candy's Wrigley division are said to be launching a lawsuit against the developers both for trademark infringement and violating a patent awarded the company in 2001 for the process of "creating elongated, twisting structures through the interaction of chewing gum and masticating teeth." 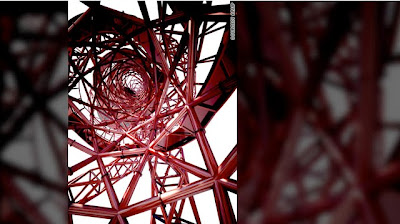 View towards the apex of The ArcelorMittal Orbit, where giant insects from outer space will be lured and made harmless. (all images courtesy ARUP)
700 brave souls an hour will be able to ascend to the observation deck, which will also include a restaurant, a walkway, and a special viewing ledge where on alternate Tuesdays at 11:00 a.m., as part of the campaign to reduce the city's budget deficit, visitors paying an additional £5 will have the opportunity to watch London mayor Boris Johnson's hair frolic in the high winds.

When asked for a reaction to the project, a spokesman for the Pigeon's Guild of Greater London Excepting Hammersmith and Fulham declined immediate comment, but admitted to being "intrigued by the possibilities". Despite the reputation of Balmond's firm ARUP for cutting-edge engineering, London bookmakers this morning were still posting 3-to-1 odds in favor of the Lord Nelson column beating the crap out of The Orbit should a direct confrontation transpire.

I am still hoping that this is some sort of incredibly elaborate April Fools' hoax....

It looks like a roller coaster in a wrestling match with itself after looking at the London 2012 logo.