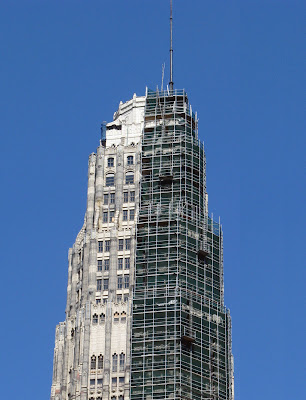 When, in 2006, a developer announced plans to rehab Vitzhum & Burns Steuben Club Building at 188 W. Randolph, an $8 million dollars contribution from the massive Central Loop TIF was going to kick in about 10% of the $79 million cost.

Flash forward to today. The project cost has soared to $145 million, but the cash cow Central Loop TIF was finally allowed to expire in 2008. No TIF? No problem! According to a report by Alby Gallun in Crain's Chicago Business, the city created still another TIF, specifically to shove another $24 million of city money into the project, for a grand total of $32 million in TIF funds - representing over 22% of the current cost estimate, more than doubling the city's involvement.

But wait - there's more! The project is also getting $40 million dollars in tax-exempt bonds from the state, plus $37 million in tax credits. You, lucky taxpayer, kick in almost half of the project cost and the private developer gets the building. Socialism, Chicago style.

When Draconian cutbacks are effecting everything in Chicago from the CTA, to the schools, to 4th of July Fireworks, the city is diverting another $26 million in tax revenues to an economically unsustainable development. In any other city, this would be a front page scandal. In Chicago, the City of Sheep, it merits barely a shrug of the shoulders.

Many preservation projects are economically unfeasible without some type of subsidy/tax break. So what are you after?

While this is questionable, I think it's more of a disgrace that the CME Group, an extremely viable concern that is worth tens of billions of dollars, got 15 million of TIF money to rehab their B class office space in the CBOT Building. Free markets for free men, indeed!

So Anonymous, when Chicago's basic services are crumbling, you really think that's the time to divert even more money from the tax base for buildings of marginal importance? Are you really claiming the Steuben is some world-class Chicago landmark?

And yes, FGFM, the CME group is the poster child for why all Chicago TIF's need to be abolished.

i have a view of this building from my office on wacker. it may not be a world-class chicago landmark, but it's definitely worth saving.

it's a much more attractive building than most anything that has gone up in recent years. it also is from a time that has come & gone & if we lose this building, a piece of history is lost with it.

scanning from left to right from my office window, i can see the bland new 60 story 300 n lasalle building, trunk tower, chicago title & trust bldg (one of my favs of newer buildings), daley plaza, the steuben, chicago temple (of the same era), 120 n lasalle (a better jahn bldg). all of these buildings from different eras contribute to the overal cityscape of chicago.

another note, there is a similar building 1 block north of the steuben that was converted to condos a few years ago, almost identical in layout (large base & tapered tower), these two buildings are an interesting contrast (one restored & the other neglected).

The core issue is why we need to help finance these properties in the first place - theres no money men in Chicago anymore. Notice most of the Towers are owned by NY and TX based real estate trusts and believe me, they arent going to fix anything. Suck the blood and life out yes, but build and fix isnt what they do.