John Ronan talks about his new design for the Poetry Foundation

"It may be easier," said architect John Ronan, when asked about the affinities between architecture and poetry, "to talk about what we didn't do, which is to read a poem and design a building."

He was speaking at a Wednesday lunchtime event at the Arts Club at which the Poetry Foundation was celebrating the groundbreaking for its first real home of its own, made possible by a $100,000,000 gift from the late heiress Ruth Lilly, which will soon liberate the organization from nearly a century of often hand-to-mouth existence in small rented rooms and cramped basements. 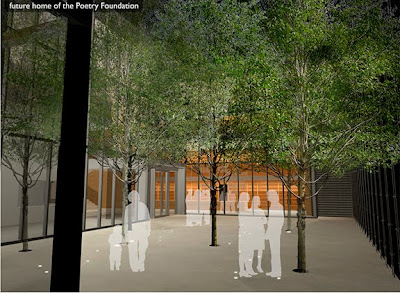 Construction is set to begin soon on the new $9,700,000, 26,000 square-foot-building at the southwest corner of Dearborn and Superior. Ronan's design creates an angle of repose in the midst of busy River North with a large garden inside a visually permeable screen wall made of a black zinc that turns solid over the other parts of the building. 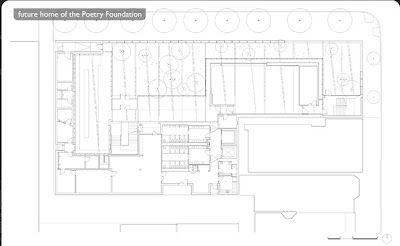 I expect to be writing a lot more about this building, and about Studio/Gang's new Media Center for Columbia College, but for today, we'll let Ronan do the talking:

. . . there are aspects of the building that are very much like a poem, and try to be like a poem. It's not a building that's a one-liner. It's not something you see right away. You might have to go back to it two or three times. You might have to see it at different times of day or year to really get an understanding of it, just as you might come back to a poem time and time again and get something different out of it each time that you read it

. . . Poets don't invent words. They just arrange words in a way to uncover new meaning or make us think about something that was hiding in plain sight, that we didn't see. And that's what I try to do. I'm not inventing new materials. I'm not 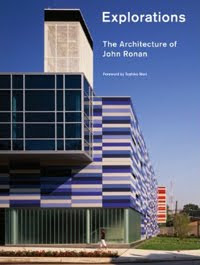 inventing forms. Just putting them together in such a way that you may have to rethink things and draw your attention to them in unexpected ways.

The two videos below capture Ronan's presentation on his design. I apologize for the visual quality, but you should be able to still get a decent view of the illustrations. The most comprehensive source for a selection of many of the same graphics used in the Arts Club presentation, in much better quality, can be found in the newly published Explorations: The Architecture of John Ronan, from Princeton Architectural Press, which provides a rich overview of the work of one of Chicago's best architects. You can also find slideshows of images on the websites of both the Poetry Foundation, and of John Ronan Architects.

(Click on the videos to view them in a larger size.)

First time commenter here. Just wanted to let you know how much I enjoy your blog. keep on posting :)

Thanks for posting Lynn.

Canada flower shops said...
This comment has been removed by a blog administrator.
1:04 AM