Just added to the April calendar of Chicago architectural events: 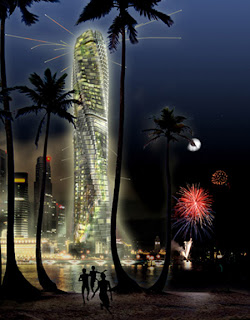 unveiled plans for a spectacular $700 million, 80-story, wind-powered, pre-fab Dubai skyscraper in which each floor would physically rotate a full 360 degrees. And he was going to put up another one in Moscow. The idea was so striking it was listed 16th on Time Magazine's Best Inventions of 2008. In November of that year, the "Renowned Italian architect" was named global Architect of the Year by the Developer & Builders Alliance.

Like Jay Gatsby, however, things soon revealed themselves to be not quite as they first appeared. Fisher's bio claimed he had received his honorary doctorate from the "The Prodeo Institute at Columbia University in York." When WCBS reported no such institution exists, and Columbia denied ever awarding Fisher a degree, Fisher's publicists responded that he actually had been awarded the degree by "the Catholic University of Rome" at a 1994 ceremony at the Cathedral Church of St. John the Divine, which, while opening its doors to all faiths, is actually the center of the Episcopal Church in New York. The reference was soon removed.

Fisher's bio on his own Dynamic Architecture website proclaims:


He cannot be considered an architect in the traditional sense. Dr. Fisher has a 360 degree experience in the world of construction – from project development to construction management, from teaching to designing.

There is no record of Mr. Fisher building anything, but he is apparently the owner of the Leonardo da Vinci Smart Bathroom Company, and has extensive work experience in innovative bathroom design. In an interview with The National, he admitted to never having heard of Buckminster Fuller. The Developers and Builders Alliance (or "DBA", which is a completely appropriate acronym on more than one level) is reported to be the former Florida Builders Association. It's heavy on "Honorary Members" such as Donald Trump and Evangeline Gouletas. Its on-line brochure lists the Advantages of membership as including the "robust backing" of Visual Media Productions Group and AC Graphics of Hialeah, "the first triple-certified Green printer in Florida."

Jesse Reiser + Nanako Umemoto, 6:00 p.m. Gallery 1100, Art & Architecture Building, 845 W. Harrison, University of Illinois at Chicago. Lecture by Jesse Reiser + Nanako Umemoto, Principals, Reiser + Umemoto, New York, which, in collaboration with ARUP, has just won the Taipei Pop Music Center Competition.
There are over a dozen and a half great events on the calendar just this week, including the SEAOI Bridge Symposium, the Society of Architectural Historians national conference, David Swan on Irving K. Pond's autobiography. and more. Check them all out here.

Did you attend the Fisher lecture? What was your impression, I've been wondering about him since first hearing about him and his questionable credentials.

I don't know if this is a relevant post or not but if so the followup would be worth it..David Fisher is now in exile because he fleeced hundreds of millions of dollars from Israel banks with his bogus companies. You can read more details if you look into it online, but it's safe to say your ? of real or fraud has been extremely answered..just by other means! Good call :)