Should This Building be Saved? 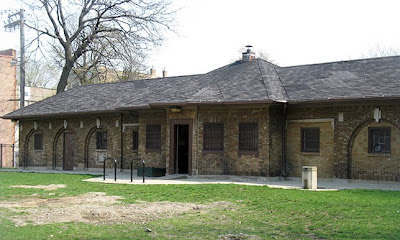 Although the qualifications of an individual building may be fiercely debated, the the most classic definition of a landmark is clear: a structure of national or international significance in terms of unique quality of design of historical import.

There is, of course, a second level of landmark, far more abject, but a kind of landmark that still forms the bedrock of continuity, not by being a masterpiece, but by carrying into the present that sense of history without which a city, town or neighborhood becomes nothing more than an accident of geography. 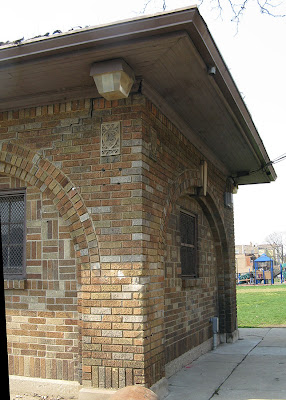 Logan Square activist Mark Heller is making a case for this building, an administrative structure from the 1920 or 30's that was retrofitted to serve as a mini-fieldhouse for Haas Park, on Fullerton, just east of California.

It's about to be replaced by a new, much-needed, expanded 10,000 square-foot facility, pictured below, designed by the firm of Johnson & Lee. 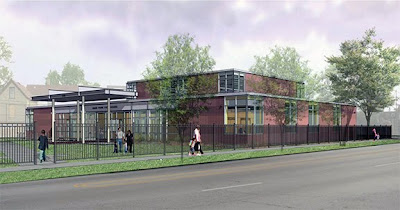 According to the city's Public Building Commission it will "include a gymnasium, club rooms, and administrative support offices. Building construction will consist of pre-cast concrete wall panels and curtain wall systems. New landscaped areas will flank three sides of the building to provide a buffer zone from the surrounding vehicle traffic noises as well as site drainage support." The construction is part of an overall $10,000,000 project to expand and upgrade the park, which is in a part of the city that finishes next-to-last in park acreage per capita.

For two years, Heller has been urging the Chicago Park District to look at re-use options, to little result. "It's just way easier," he says, "to demolish a classic small neighborhood park brick building than to 'think outside the box' and explore preservation." He's proposing moving the current building - at a cost he estimates at $250-300,000 - to a new location where it could be adaptively reused, such as Humboldt Park, or the new Bloomingdale Trail.

This Saturday, April 24th, between 1 and 3:00 p.m., there will be a "farewell" party for the 80-year-old structure, with food, refreshments, music, and an absence of sentimentality.

The Haas park building is rated "orange" on the Chicago Landmarks Commission Historic Resources Survey of potentially landmarkable buildings, but the listing cites no architect, construction date, or style.

In a large urban center, it seems always to be about building bigger. Is there still room for modest structures of humble character, who did their jobs well, and with grace? 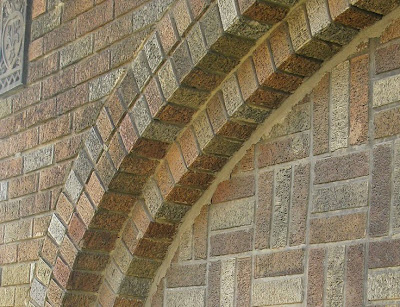 This is a really attractive building, it is a shame to see it go. I've always had an affinity for old park shelters, this building is somewhat reminiscent of the ones built by the WPA.

Perhaps some way of integrating the new building as an expansion of the old? (Or at least keeping a facade.) The interior of these buildings also have a unique feel to them that form lifetime memories.

Since it was obviously open air originally, why couldn't this have been reused as an entry vestibule or picnic pavilion?

That said, the new building is very nice. It looks like Johnson & Lee produced it in conjunction with Booth/Hansen. http://www.boothhansen.com/_projects/cultural/05B.html#

And finally it's rather disingenuous to seek LEED Silver status while sending a reusable building, and all its embodied energy and debris, not to mention intangible character, off to the landfill. That's not "green" at all.

As to the architect of the historic pavilion, just figure out which of the 22 independent park districts it was part of when built, then see who was designing other park buildings around it at the same time. They probably used the same firm for everything.

And while the park side of the new building is attractive, the Washtenaw elevation - where this building sits - is less so. https://docs.google.com/viewer?url=http://haaspark.org/sites/haaspark.org/files/HaasPark_PBC%2520Final%25202_23_10_0.pdf

Completely disappointing. Replacing a beautiful, elegantly detailed structure with what looks like a 1950's elementary school. I agree with adgorn, why not add to this structure for the needed spaces?

What a bunch morons!! One has only to glance at your pix of this lovely building and have at least a 5th grade education to know that it should be saved, added on to or what ever it takes. This is almost laughable if it wasnt so sad....Chicago is going the way of St Louis. What was once "The City of Big Shoulders" should be renamed "The city of Small Brains" .... and big D*c@k# !

I'm with Isaac - it's a *really* attractive building. I live not too far from there and from the first time I drove by (quite a few years ago now), I was like "wow - that's really a great old building." I wish there was a way that they could keep it AND create a new much-needed structure. I think that would feel like a win-win for almost everybody.

Has any of you been in the building and seen kids try to use it as a park building? I'm an active preservationist and reuser but have to disagree with the assessment here. Years ago the park district found Haas to be the most used park for its square footage and the picnic shelter turned fieldhouse has poorly served area kids for years. They've been playing basketball in 10' x 30' room with 8' ceilings. Girls tumble on mats pressed up against cement walls.

This expansion project has been in the works for 10 years and was correctly stalled by a fruitful local campaign to preserve the block of buildings to the west (Fireside Bowl, Oscar Wastyn Cycles, and the great mural 'Tilt'). A change in political leadership and focus helped keep efforts on track after that misfire.

I'm a member of the Haas Park Advisory Council, a neighbor and current Tee Ball Dad and I can tell you that there will be a lot of sentiment expressed at the Farewell Party. Lynn's comment to the contrary comes off as snide and as a reflection of relying on Mark Heller as the sole source for this piece. We have an advisory council member who has been involved with the park for over 50 years and keeps everyone in touch with the past.

And if Mark thinks that they can reuse the structure for $200-300k, I'd like to see him get in that business. I've done my share of knocking mortar off bricks, and let me tell you this fieldhouse is no Chicago Stock Exchange arch. It's a blast from the past, but should it be saved? No.