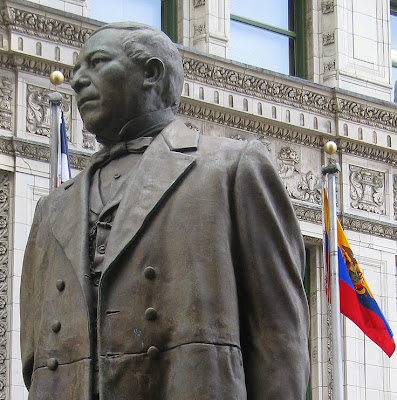 Is that the slight hint of a smile I see on the face of the statue of savior-of-the-Mexican-Republic Benito Juárez? On Saturday, 42nd ward alderman Brendan Reilly announced via his weekly newsletter that reconstruction of the Plaza of the Americas, where the statue makes its home, will begin on Monday. 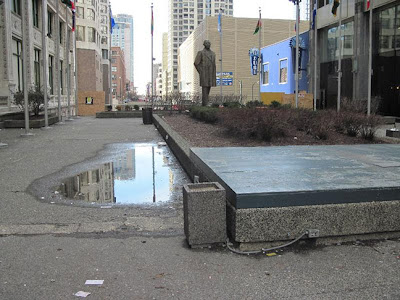 (photo courtesy Brendan Reilly, Phil Levin, GNMAA)
Reilly takes credit for negotiating "the final terms of a $750,000 public-private agreement for the reconstruction project and on-going maintenance of the plaza," which is on Michigan Avenue, above Hubbard Street. Co-signatories to the agreement are the Chicago Department of Transportation and National Association of Realtors, whose headquarters building forms the plaza's northern border.

The alderman says the project, which is to include structural repairs, resurfacing, improved lighting, new landscaping, and restoration of the plaza's fountain, "will be completed at no cost to Chicago taxpayers. Because we have confirmed NAR is legally responsible for the condition of the Plaza, the Alderman focused his efforts on holding NAR to their obligations and working to foster a partnership with them moving forward. Alderman Reilly is grateful to NAR for taking ownership of this project and committing $750,000 to cover all of the above-mentioned work. "

A long-closed walkway that reaches from the western end of the plaza and extends all the way to Wabash appears to have completed, awaiting only the the bureaucrats swarming to take the credit at its re-opening. 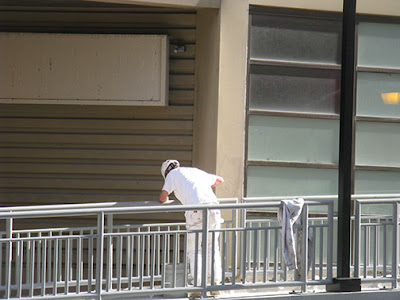 Now let's hope Alderman Reilly can now work his magic on the even more decrepit plaza next door, between the Wrigley Building and Wrigley Annex.

I would argue that its repair is even more essential. The Plaza of the Americas leads to the spiky narrow walkway pictured above. The Wrigley Plaza, in contrast, is the Mag Mile gateway at the end of what is now one of Chicago's grandest promenades, stretching all the way back to Marina City and Mies's IBM Building. It's where pedestrians reach the perimeter of the magnificent new Trump River Walk, only to be dumped into a dark slum of a covered-over fountain and deadly gray concrete that lies between the elegant terra cotta of the two Wrigleys stinking like a dead mackerel. 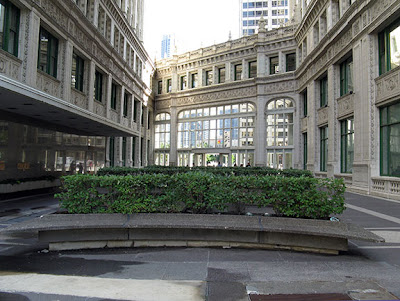 Earlier this month, the Trib's Blair Kamin had an excellent piece contrasting the Trump and the Wrigley, and revealed that - surprise, surprise - the plaza is actually owned by the city, which is responsible for, and has clearly all but abandoned, its maintenance. Two days later Kamin reported CDOT has "begun discussions" with Wrigley about improvements. Kamin quoted CDOT spokesman Brian Steele as adding "no firm plan, timetable or funding sources are set."

How encouraging. It sounds like the kind of statement bureaucrats make to bid time until everyone forgets about the problem, making it go away. William Wrigley is no longer a Chicago company. Two years ago, global candy and gum powerhouse Mars bought it for $23 billion. Wrigley was traditionally a major philanthropic presence in its home city. Mars has been invisible. If it has any interest in not being typecast as a neglectful absentee landlord, this would be a good time to step up to the plate. 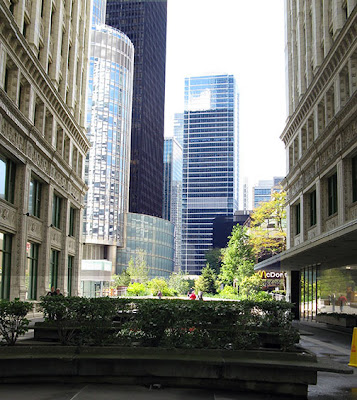 I really hope the renovation makes the stairwell down to Hubbard a more integral and celebrated part of the design. All of the grade separations in this area are really a mess and could use some well-designed stairwells to make the transition up and down feel more seamless and intentional. Even around the new Trump plaza area, the connection between the lower and upper levels feels like an afterthought. Approaching the Trump dog park from the north, it's perplexing how one is supposed to get up to the street that passes overhead.

No disagreement on the Plaza of the Americas stairs. One comment on the Kamin blog also suggested linking the plaza to the Trump Riverwalk - I'm assuming along the back of the Wrigley.

I guess I feel a little more charitably than you about the Trump navigation. My take of it is you walk south under the viaduct to the dog park, and as soon as you get there, you can pretty clearly see the glass elevator shaft and grand staircase your right.

Lynn -- The Trump plaza is great (I eat lunch there several times a week now), but I still feel that it turns its back on the street to the north and treats the street more like an alley. I think it should be the highest priority to make basic access in public spaces intuitive and celebrate connections. While Trump provides the access, it doesn't pass the intuitive test where it meets neighboring streets. Visitors shouldn't have to go hunting under every viaduct for a stairwell to a street or path they can see in plain sight right in front of them.

Connecting the Plaza of the Americas to the Trump plaza would be great, but I think it should be done using the street. Instead of using another floating walkway to avoid the street below, why not improve and engage the street below? We should always aim to simplify and not overcomplicate basic infrastructure.

A floating walkway would be appropriate however on the riverwalk, to connect the Trump plaza to the stairwell down from Michigan Ave. along the side of the Wrigley, since that would create an intuitive connection.

It's rather symbolic that the Wrigley Building is owned by Mars and Wrigley Plaza looks like a Martian landscape.