The cow paths of Rafael Nadal: Does technology make us predictable? 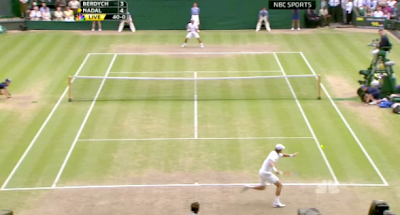 Paul Kedrosky, on his website InfectiousGreed has a fascinating analysis of the way the playing of championship tennis has evolved, using as his base data the change of the "cow paths"- the areas of the court most used by the players, killing off the grass.  In the 1980 finals between John McEnroe and Björn Borg, the paths form a "T", from the baselines to the center in the net.  In 2010, with Rafael Nadal and Tomáš Berdych, the now linear cow paths are confined to the baselines.

. . .  the game of tennis, even on grass, has been transformed by technology in recent years, with a “power baseline” game becoming dominant. Players like Rafael Nadal wallop the ball from the baseline, hitting unreturnable shots (“winners”) from parts of the court where players like Connors, Ashe, Borg and McEnroe would never have imagined it possible.

Turning back to court usage patterns, what this makes clear is the unidimensionality of court use. The dead areas in 1980 weren’t as dead as those in 2010 – it’s the difference between mostly dead and all dead, to borrow a phrase from Miracle Max.

We think of technology as infinitely liberating, but on a fundamental level, whether we're talking about tennis rackets, Maya, Photoshop or CGI, does it really funnel everything through its limitations, making a commodity of creativity?

Read Kedrosky's Everything I Know About Tennis I Learned from Cow Paths here.