Watch out for the foam spikes! Inside Apple's freaky Blue Room. (via Engadget) 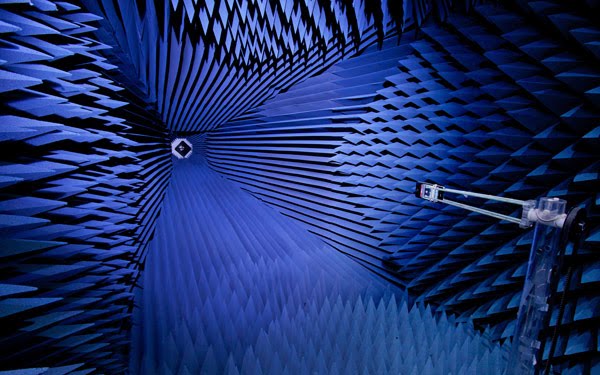 They're called the "Black Labs", but, like Steve Jobs himself, they're not about to lick your hand.  The Black Labs are a series of 17 anechoic chambers, costing up to $1.2 million each, on Apple's Infinite Loop campus, super-secret - until now.  After Jobs' Friday mea culpa on the controversial antenna problems on Apple's new iPhone 4, a select group of journalists including Engadget's Joshua Topolsky were given a tour of some of rooms to back up Jobs statement that the reception problem wasn't due to a lack of testing, and that Apple's facilities were, in fact, far superior to the chintzy set-ups such as those deployed by Consumer Reports to create their publicity grabbing "don't buy" press blitz for the same iPhone4 that beat out all other smartphones in their latest rating.  No pictures or video allowed by Apple during the tour, but Apple PR helpfully released a few more images  of what must be some of the most surreal interiors around today.  You can check them out, and read Topolsy's capable report,  here.
(Click on time for permalink) 10:43 PM

Wow, those are some substantial acoustical foam installations! I've read these anechoic chambers isolate sound to a degree people can even hear the blood rushing in their head as everything our brains usually filter out is gone, and they're left to focus on only one or two things.