That's what a Marina City neighbor called them as we watched a family of butterflies flitting among the flowers along Marina City's riverwalk. We were comparing them to the filming of Michael Bay's latest epic, Transformers 3, which is shutting down a good part of the Magnificent Mile for filming this weekend, after blowing stuff up on LaSalle last weekend. 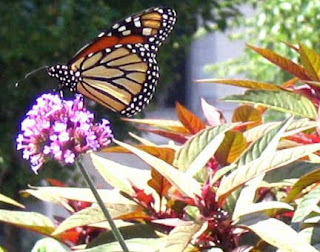 Monarchs have also taken up in the Chicago's Millennium park, and you can see a photoessay we did on them a few years ago here.  No CGI required.