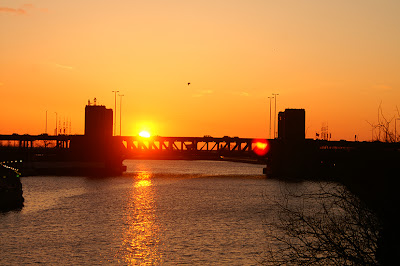 click image for larger view
We've just learned that Saturday was the last day for indefatigable correspondent Bob Johnson at this firm of many years.  In addition to the innumerable great photo's he's provided to this blog, Bob's engineering skill has gone into the construction of some of Chicago's most prominent towers, not to mention his great work on behalf of the Structural Engineers Association of Illinois.  His energetic advocacy has helped expose thousands of Chicago area students to wonders and challenges of engineering, and encouraged them to exercise their own knowledge and creativity in the cause of urban design, through such endeavors as the excellent Future City competition, and this past February's Explore Engineering Day at CAF during National Engineering Week.

Bob tells me he will taking a few weeks off (hopefully the weather will soon actually start to resemble Spring), deliver some lectures, and take up some of the many invitations he's received to become involved in various STEM (Science, Technology, Engineering and Mathematics) Education initiatives, which were a major focus of Barack Obama's State of the Union speech earlier this year.  Just about everyone talks about the central importance of getting more young Americans educated and involved in these fields.  For decades, Bob has been doing something about it.

He says he's not actively looking for another full-time gig right now, but he's still available for consulting, and if you need to get ahold of him, let me know and I'll pass it on.

Just reading all the things Bob is involved in leaves me exhausted, so I think it's only appropriate to illustrate this post with one of Bob's shots of a beautiful sunrise over the Chicago river.