click images for larger view
Okay, you've had almost a year - it opened last June - so if you miss the best architectural exhibition I've seen in ages, you've got no one to blame but yourself.  One final warning:  The extraordinary Louis Sullivan's Idea, at the Chicago Cultural Center, closes Tuesday, May 2nd. 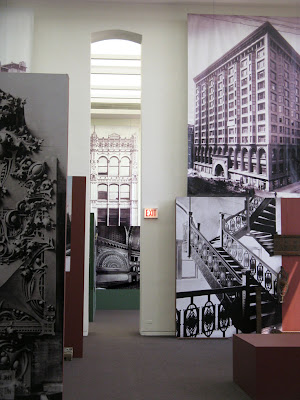 An inspired collaboration between City of Chicago Cultural Historian Tim Samuelson and graphic artist Chris Ware, it offers an eloquent selection of artifacts and photographs,  a strong and convincing viewpoint, and a compelling story.  Ware makes full use of the double-height galleries with large photographs that give you a clear idea of Sullivan's work both in scale and detail. 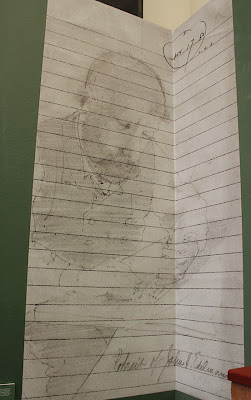 And the story Tim Samuelson recounts is a true epic, from the dismissal of the early work of Sullivan and his Jewish partner Dankmar Adler by Chicago's first architect, John Van Osdel as "architecture run crazy.  It's an experiment in Jewishness like we have never seen before," to the crucial influence on Sullivan of the free-thinking, now almost forgotten John Edelmann, foreman of William LeBaron Jenney's office when Sullivan came to work there, who "regarded human beings as inseparable, integral parts of the natural order," and whose image was captured by Sullivan in the sketch you see above.   It carries Sullivan through to his greatest triumphs, and to his troubled final years, when his indomitable spirit carried him through abject poverty and rapidly declining health to produce his last two gifts to architecture, the books The Autobiography of an Idea, and A System of Architectural Ornament. 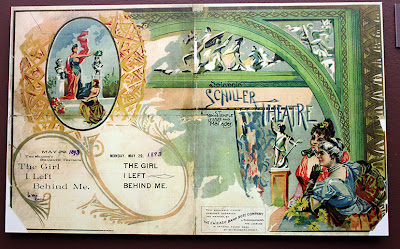 This fall there will be the highly anticipated exhibition of the work of Bertrand Goldberg at the Art Institute, and it has its worked cut for it in meeting the raised bar that Louis Sullivan's Idea presents.  You can see more images of the exhibition and my original report, including a video of Tim Samuelson talking about the show here, but really, Louis Sullivan's Idea is like a great building; it's not meant to be read about, but to be seen and experienced.

Between now and May 2nd, the Chicago Cultural Center, 77 E. Randolph, is open every day of the week, Monday through Thursday 8 a.m. to 7 p.m, Friday, 8 a.m. to 6 p.m., Saturday 9 a.m. to 6; and Sunday 10 a.m. to 6 p.m.  Enter on Randolph, walk up the staircase winding around the outdoor garden, go through the doors on the 2nd floor landing and turn to your right, and enter into the life and thought of one of history's greatest architects. 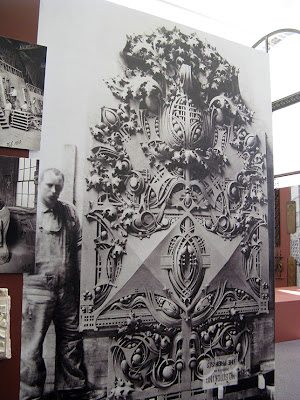 New - Free Louis Sullivan Tours with Sam Guard
And yes, you actually get awarded for your procrastination, starting Monday, April 25th, construction engineer, historian and story-teller par excellance Sam Guard will be offering special three-hour tours (no cracks about the SS Minnow, please) that begin at the Cultural Center and then spill into the streets of Chicago to encounter the real thing, Adler & Sullivan's Carson Pirie Scott store, the Gage building and ending up at the Auditorium.