Tigerman on Monday, Hecker at the Graham on the 30th - two more for April, plus Richard M. Daley Mayors' lovecast

Yes, it's April 22nd, and no, we're still not done adding to April calendar of Chicago Architectural events. 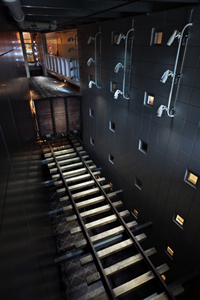 This coming Monday, April 25th, at 6:00 p.m., the indomitable Stanley Tigerman will be presenting Displacement, a lecture sponsored by SAIC AIDO at Fullerton Hall of the Art Institute. That same evening, same time, Spanish architect Antón García-Abril will be lecturing at the Instituto Cervantes. And on Saturday, April 30th, Florian Hecker will be offering the U.S. premiere of his work Speculative Solution at the Graham Foundation, which this Tuesday, the 26th will be screening a program of short films, a preview of May's Architecture and Design Film Festival.

On Thursday, the 28th, Susan Rawles talks about the Worsham-Rockefeller Bedroom at the Driehaus Museum, while on Friday, SEOAI tackles the Seismic Design of Bridges. There are still over a dozen great events to come on the April calendar. Check them all out here.

It's not on the calendar, because unless you've received an invitation, well, you're just not invited, but there's also the National Mayors Summit on City Design, which opens on Thursday and culminates in a Friday luncheon event The Design Legacy of Richard M. Daley, in which mayors all across the country will indulge themselves in one last opportunity to salivate over "The Mayor's Mayor", for possessing what few of them will ever have - almost unlimited power for over two decades. The event will include "Remarks of Appreciation of Mayor Daley" (sounds just like a City Council meeting!) and the presentation of the Joseph P. Riley, Jr. Award for Leadership in Urban Design to our departing patriarch.

That event, as well as much of the conference, is scheduled to be webcast, including a Thursday morning keynote by Thom Mayne, Culture Now: The Contemporary American Condition, and a lunchtime session, How Design Has Shaped Chicago, with Lee Bey, Gerald Adelmann, and Barbara Gaines.

I have to be honest that I'm still not quite clear on how you access the webcasts, but the event press release suggests we "join in the Twitter conversation at #MICD50 and watch the daily mini interviews with mayors at www.usmayors.org."  Maybe some information will turn up there.