Update: the exhibition has now been extended through April 25th, and it includes two lecture/panel events that we will be discussing tomorrow. 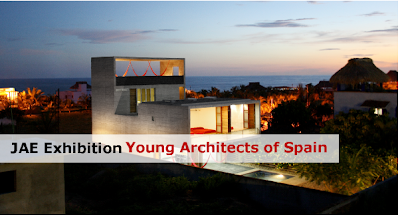 click images for larger view
You have only two more weeks, through April 25th, to see an ambitious exhibition, Young Architects of Spain (YAS): A Window to the Unknown, at the Instituto Cervantes, which has set up shop at 31 West Ohio, providing a small slice of culture in the banality of the Grand Plaza residential towers. The exhibition, part of the ongoing Architecture and Urban lecture series organized by the Instituto Cervantes of Chicago and MAS Studio and directed by Iker Gil.  "Its goal is to establish a platform in Chicago for an open exchange of design ideas and interesting experiences within the world of architecture and urbanism."

The exhibition grew out of a competition staged by Spanish Ministry of Housing, "an open call to all young Spanish architects [under 40], both within and outside of Spain’s borders." The more than 700 submissions were culled down to 62 by an international jury that included such luminaries as Juhani Pallasmaa. Alberto Campo Baeza, and the omnipresent Kenneth Frampton. The selected works were exhibited first in Madrid in 2007, and then made the rounds to the Columbia School of Architecture in New York, last winter in Brussels, and now here to Chicago. 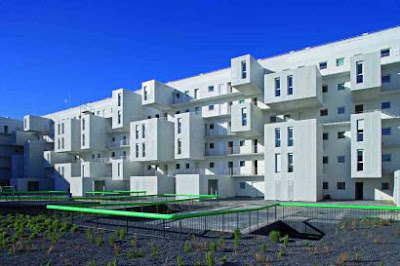 102 viviendas en Carabanchel, Madrid, Dosmasuno Arquitectos
The handsome, bilingual catalog includes often fascinating essays from each member of the selection committee, with an especially personal one from Campo Baeza, who finds commonality in the designs of Spanish architects along three lines: Idealism (ideas over mere form), sincerity in construction, and functionality. "Their houses," he writes, rather than arbitrary formal exercises, are houses to be lived in happily." 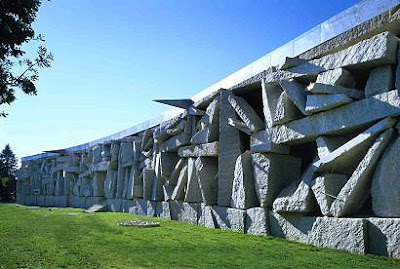 SGAE, Santiago de Compostela,  Ensamble Studio
Jorge Otero-Pailos records some basic facts about the participating firms. First, they are small - two principals, on average, plus four additional architects. Almost a third work from a home office. Only 18% of employees are foreign nationals. Average firm billing is 171,000 (about $250,000 at today's exchange rates). Average salary is between about $20,000 and $31,000, or only about 2 to 3 times the mandated minimum annual wage. 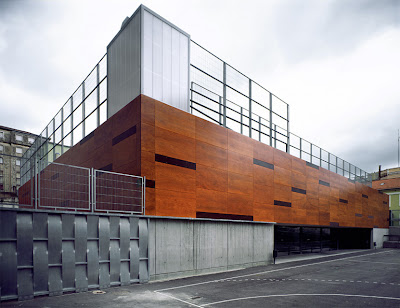 Numancia Gymnasium, PO2 Arquitectos
Otero-Pailos takes note that what may have been the first architectural competition, in 448 BC Athens, for a war memorial on the Acropolis, was decided by popular vote, an unlikely prospect today. He also discusses how the stereotypical set of human figures used to inhabit architectural renderings has descended largely unchanged from the 1870's down to the present day's no-longer-young radicals such as Rem Koolhaas and Ole Scheeren, but the younger generation has different ideas.


[Younger Architects such as] Royo and Morales do not presume to know visitors or wish to reduce architecture to a stage set within which people are understood as videogame avatars and expected to perform predictable behaviors. . . . The commanding function of the author-architect is interrupted by the recognition of an alien presence, the visitor, who creatively interjects and participates in the creation of architecture.

Although the architects are Spanish, the projects are placed throughout the world, including the Puente peatonal, in Shanghai, by Pedro Pablo Arroyo Alba (CA-Group), show below both under construction and completed. 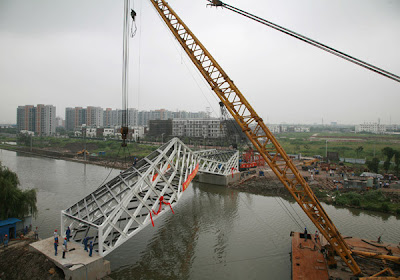 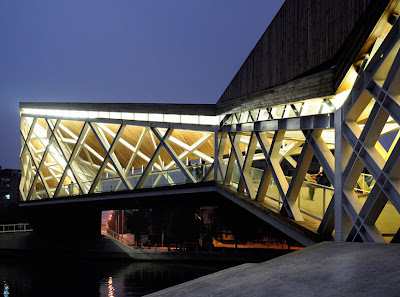