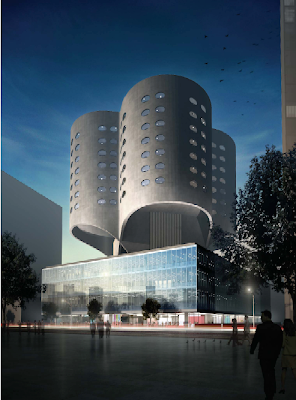 click images for larger view.
Northwestern University is hell-bent on destroying an essential piece of Chicago architecture,  Bertrand Goldberg's Prentice Hospital, saying  they've investigated re-use options and determined that there is no other choice.

Bunk. The Chicago Tribune editorial board may have swallowed those empty claims whole, but most Chicagoan's are not so gullible.  Now, Landmarks Illinois has now called Northwestern's bluff with a stunning report, A New Use for a Modern Landmark: A Reuse Study for the Former Prentice Women's Hospital.  It's a great and compelling read, and you can - and should - download it here.

It's a fact-packed, eloquently illustrated and thoroughly researched study of the structure, beginning with a list of testimonials on the building's importance from everyone from Helmut Jahn, Jeanne Gang, and Blair Kamin, to The New Yorker's architecture critic Paul Goldberger.  The building includes 340,000 square-feet of space, with 17,000 square feet of open plan space on each of the seven floors in the iconic cloverleaf tower. 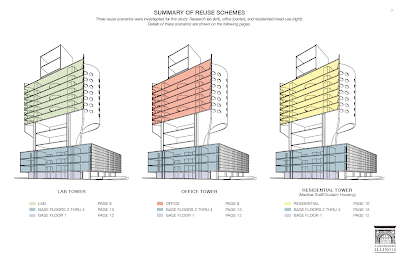 That open plan makes the building especially suitable for re-use, and the report comes up with three possibilities, as a Research Lab Tower that could accommodate over 800 researchers, an office tower accommodating up to 2,000 workers in the kind of "open office" plan that's becoming increasingly prevalent in workplace design, or as a residential tower with over 100 residences for medical staff or student housing. 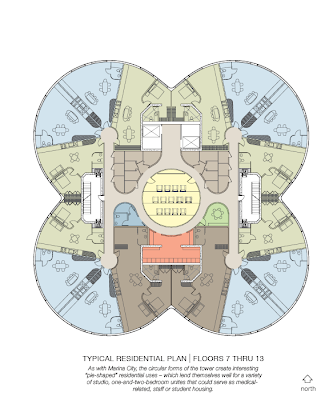 That third option was actually presented a while back by Northwestern PhD student "Nick" in a comment to one of my earlier posts on the battle of save Prentice . . .


Prentice is situated right in the middle of the medical, business, and law schools (directly connected via tunnel or bridge to the medical campus) and would be an ideal location. We also desperately need a student union and community space to promote interaction, which is currently non-existent within and between programs. I would be very surprised if Prentice would require extensive work to convert into a welcoming, functional student center, which would have the added bonus of keeping with Goldberg's original spirit and vision.

Landmarks Illinois reports that reusing Prentice would be, on average, over 40% cheaper than recreating the space in a replacement structure. Just as importantly, it would prevent the creation of another 23,700 tons of construction waste, one of the primary contributors to the nation's landfills.  As has been proven time and again, the greenist building is usually the one that's already built. 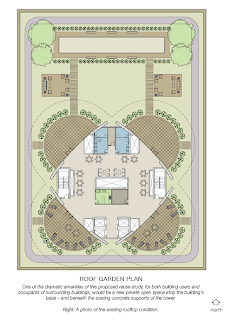 You can debate the particulars of the Landmarks Illinois report, but it makes the primary message crystal clear:  Northwestern's claims that Prentice Hospital is some sort of unsalvageable white elephant are without foundation.  Not only is Prentice Hospital a central and irreplaceable part of Chicago's architectural legacy, Bertrand Goldberg designed it such a way that it can remain a valuable, productive piece of real estate for many decades to come.

Lynn Becker said...
This comment has been removed by the author.
1:12 PM

This building must be saved! It makes me sick to think that this building could be replaced by another bland box.

This is the building that taught me to look up. There's not another one like it anywhere that I know of. Goldberg, a native Chicagoan, was quite an amazing guy. His legacy deserves to be protected.