Since 1928, the National Steel Bridge Alliance Prize Bridge Competition has honored more than 300 United States bridges (yeah, I know, that's the third time we've used the word "bridge"  - no, four times - in a single sentence) for excellence in design.  This year, the Alliance, the bridge division of the American Institute of Steel Construction, is promising "the most exciting steel bridge competition in history," a selection of all-time greats from a roster of past winners, with both Industry and People's Choice awards.

So, you the People's have through the end of April to pick your favorites.  You can find the on-line ballot form here.

Illinois is represented by 16 choices.  Indiana has none. (Take that!)  Kansas has one, in Leavenworth, also known as "the bridge no one really wants to cross unless its outbound".   Chicago nominees include the Wabash Avenue bridge, completed in September of 1930 for a mere $1,750,000. 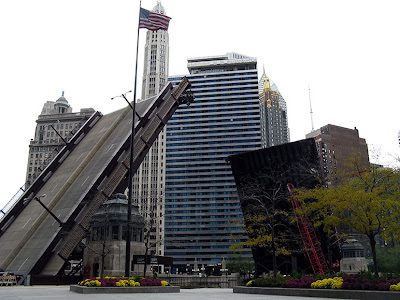 click on images for larger view
Skip forward a half a century and there's the Columbus Drive bridge.  Flat and plain, it looks a little underwhelming today, but when it was completed in 1984, it was one of the largest movable bridges in the world - seven lanes of traffic, two 10-foot sidewalks, 270 feet between pivot points, with each of its twin spans weighing 6.3 million pounds, not counting the guy walking across with that really humongous Great Dane. 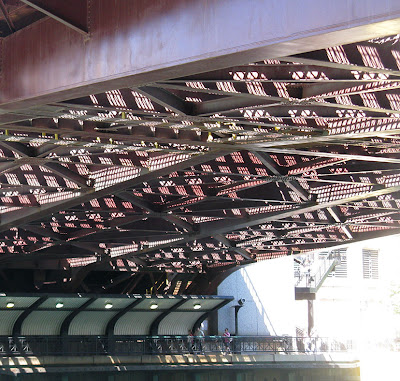 There's also 1974's Ramp "Q" Structure, an elevated whipsaw which I believe is on the Bishop Ford Freeway somewhere around Stony Island.  (If anyone has tighter info on the exact location, please let me know.) 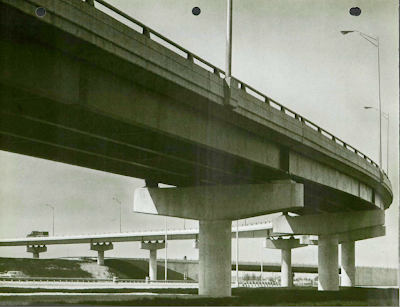 Two of my favorite steel bridges, which didn't make the cut, are both on North Avenue (kind of), both the old classic in Lincoln Park (and what other city can claim they have dozens of bridges on LSD?) . . . 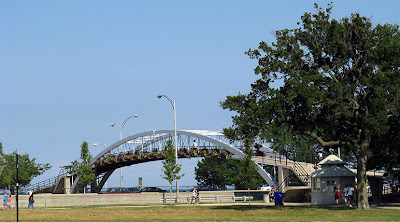 and a much newer addition over the river . . . 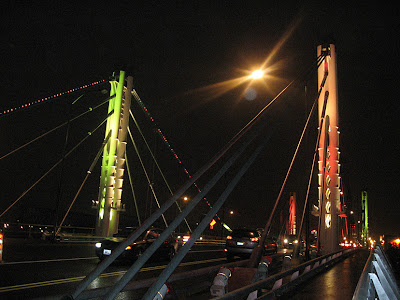 The good news is that, due to date and technique of construction, such icons as the Brooklyn Bridge are not even in the running.  The bad news, the Zakim Bunker Hill Bridge and Golden Gate are.
But don't let that discourage you.  This is a contest where ballot stuffing is not only not frowned upon, it's encouraged.  You can vote for as many of the nominees as you like, as many times as you want. It's  like a classic  Chicago election - but legal!  Vote early and vote often, here.

I like the idea of the newer North Avenue Bridge, but in execution, I find it awkward. The design is too forced, there is no need for such an elaborate and massive design over this relatively short span.

In NY if you are not familiar with the Rainbow Bridge you should check it out and vote for it. It is a very graceful art deco arch in an amazing setting crossing the Niagara Gorge within view of the Niagara Falls - Really beautiful.

Verrazano is impressive for its sheer size, but it can't match the George Washington Bridge for beauty and incredible visual drama.

The Columbus Drive bridge is pretty boring from the top... you have to look up from the riverwalk or a boat to see the gigantic pieces of steel making up this behemoth. That's real Chicago right there.

Regarding the Lincoln Park bridge by Noth Avenue, I love it as well. Wasn't this supposed to be replaced by a new ADA bridge designed by Doug Garofalo? What is the status of that?