Angel of Peace Flies the Coop 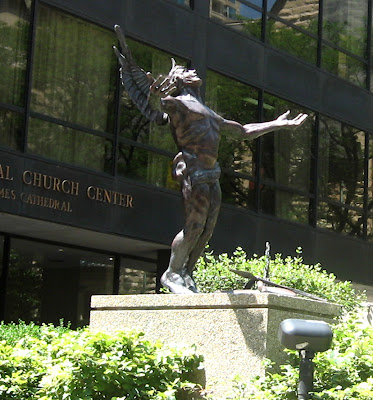 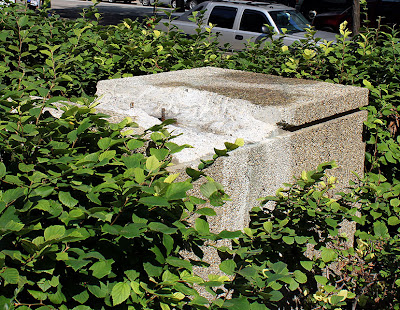 Sculptor William H. Kieffer's Angel of Peace has been providing benediction over the Episcopal Center on Huron's since its November, 1999 dedication, when Daniel Berrigan spoke of it as a reminder  "of our humanity in an inhumane time . . . telling us in very simple, biblical terms of God's hope for the world." The cast-back figure of the nine-foot-tall bronze angel seemed to be gratefully accepting whatever heaven would provide, whether snow . . . 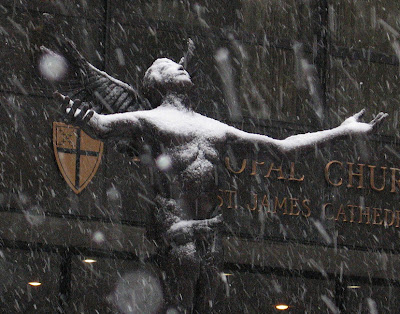 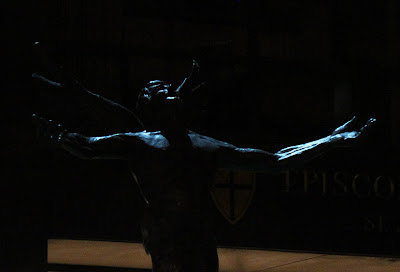 or having his energy channeled by retiring mayor Richard M. Daley in a classic Sun-Times photo by Al Podgorski. 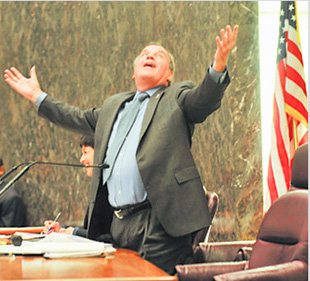 It took three decades for the Angel of Peace to descend in front of the cleanly modernist 1969 midrise structure with 45-foot-wide spans, designed  by architects James W. Hammond and Peter Roesch.  And then he lasted less than a dozen years.  Yes, the Angel of Peace has been put in storage.   (And if that's not a metaphor for our time . . .) 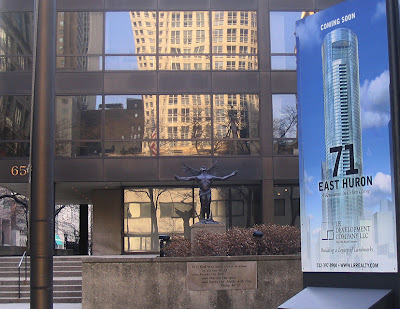 It's part of the revamp of the building's plaza by Loebl Schlossman and Hackl.  The entire complex just missed obliteration a few years ago when a proposal for a 71-story Canyon Ranch residential tower, designed by DeStefano + Partners, fell through for lack of funding. 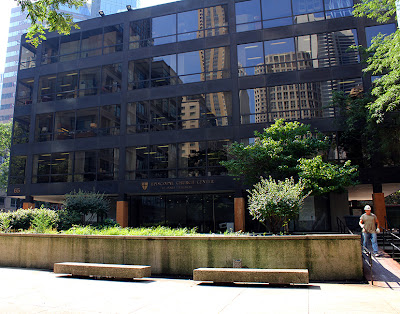 The original design of the plaza was in the classic 1960's/70'e windswept, rough concrete embankment style that fell out of fashion long ago  It worked better at the Episcopal Center's smaller scale than at most other locations.  The texture of the slightly monolithic concrete walls and slab stone benches had their own brutalist grandeur, but in our own time we're clearly looking for softer, more yielding stuff. 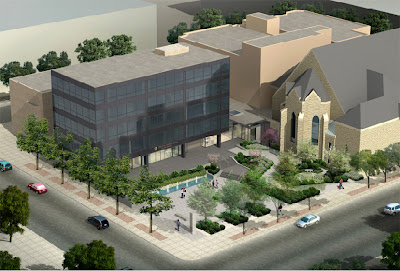 And so we have a new design and the plaza a new name, St. James Commons. The single open, rectilinear space with clear, sharp edges is to be broken apart into a number of subspaces, permeated and separated by additional landscaping defining diagonals and curves.  The paving stones shift orientation as the walkways turn.  The edge between building and plaza is mediated and obscured by greenery and a long fountain. 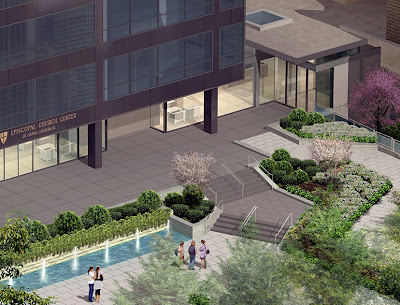 At the northwest corner, against the exterior of the adjacent St. James Cathedral's apse, a paver shamrock at its center, will be a labyrinth.  (And if that's not a metaphor for our time . . . ) 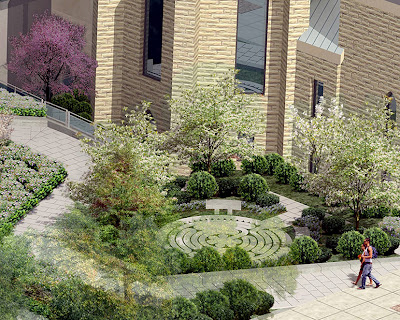 And it's in a garden near that labyrinth, a spokeswomen for the renovation assures me, that the Angel of Peace, although it doesn't seem to appear in any of the renderings, will most probably be relocated.  You can almost hear the angelic lament - "Once I stood on a high pedestal, halfway to heaven, casting God's grace over the entire shebang.  Now. I'm a sideshow, competing with a shamrock labyrinth."

Work on the plaza is scheduled to go on winter hiatus after November, with completion sometime next July.  The renovation project actually has its own website, where you can follow the progress through weekly construction updates. Renderings, site plans and more information can be found on the earliest, April pages here.

Please read my humble request on my profile

I did like that plaza, although they didn't seem to be keeping it up very well.

So, I guess this means they won't be selling the parcel when the market heats up again?