Sunday Reading: Eileen Gray's E.1027 house regained, The Reinvention of Rahm, a Conservative debunks the GOP, and the sound of real leadership, from FDR 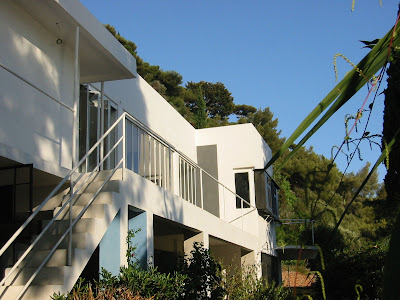 Financial Times architecture critic Edward Heathcote has the story of Eileen Gray's 1925 E.1027 house, the modernist landmark that predated Le Corbusier's Villa Savoye by several years.  Uninvited, Le Corbu painted a series of murals on the lower murals, built a hostel on the hill above it, and finally washed up on the beach below after drowning in 1965.  Long abandoned, E.1027 is being lovingly restored by an organization called Friends of E.1027, and is scheduled to re-open next year.

Elsewhere, Shirley Anthrop has an interview with former CSO Music Director Bernard Haitink, who will return to Chicago this fall with performances of the Mahler 4th and Haydn's Creation.

The new Business Week includes Devin Leonard's The Reinvention of Rahm Emanuel, an update on the convoluted tale of The Saving of Group Zero, and a story on Spam's Long March in China that is, for a change, about not Internet skulduggery, but canned meat.

Over at the Sun-Times, conservative pundit David Frum cuts the floor out from under the GOP lunatic fringe with Obama has made a bad economy worse? Really? How?, which concludes . . .


Gov. Rick Perry on Friday urged us to believe that the economy is gripped by the worst slump since the Great Depression because Obama spoke disrespectfully of the owners of private jets. To which I can only say: Really? That’s the indictment?

In The New York Review of Books, Elizabeth Drew in What Were They Thinking? dissects the Debt Ceiling Deal, while on its blog, Ronald Dworkin reminds us what real leadership is with a quote from a FDR campaign speech from 1936.


For nearly four years you have had an Administration which instead of twirling its thumbs has rolled up its sleeves. We will keep our sleeves rolled up. We had to struggle with the old enemies of peace—business and financial monopoly, speculation, reckless banking, class antagonism, sectionalism, war profiteering. They had begun to consider the Government of the United States as a mere appendage to their own affairs. We know now that Government by organized money is just as dangerous as Government by organized mob. Never before in all our history have these forces been so united against one candidate as they stand today. They are unanimous in their hate for me—and I welcome their hatred. I should like to have it said of my first Administration that in it the forces of selfishness and of lust for power met their match. I should like to have it said of my second Administration that in it these forces met their master.

As Dworkin notes, Roosevelt won re-election by the largest majority before or since.

Special bonus, from Wikipedia, is this chart of the national debt as a percentage of GDP under every U.S. President since 1945.  Surprise, surprise, until Obama, the ratio fell under every Democratic president, Dwight Eisenhower and the first term of Richard Nixon.  It's increased under every Republican President since, big time.  Ronald Reagan (+9.3 and 11%), George H.W. Bush (+13.0%), and George W. Bush (7.1 and 20.7%) all grew the debt to GDP ratio a higher rate than Obama (9.0%).  It was Dick Cheney who famously declared "deficits don't matter." 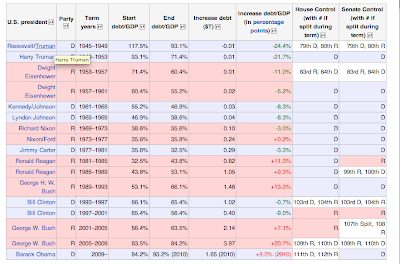 With all due respect: Friends of E1027 has had little or NOTHING to do with the restoration of Eileen Gray's E.1027!