Beyond the dogma: The Myth of Pruitt-Igoe, at the Gene Siskel next week

It's the Zapruder film of the failure of modernist architecture, playing in a continuous, hypnotic loop, like the razor to the eye in Un Chien Andalous, the imploding, to the music of Phillip Glass, of the buildings of the Pruitt-Igoe Public Housing complex in St. Louis, designed by architect Minoru Yamasaki, looking as they fell more than a little like a Frank Gehry building on the rise. 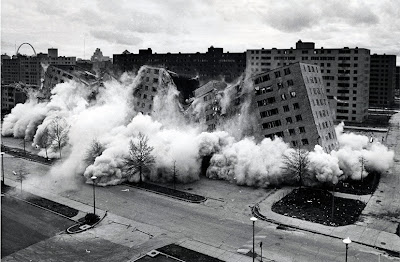 click images for larger view. historical images: State History Society of Missouri
It's said to be a prototype of toxic architecture, taking residents from hope to despair in little more a than a decade. What could they have been thinking?  What could anyone have expected with those kind of residents? Better to have left them in the slums.

H.L. Mencken once said: "There is always a well-known solution to every human--neat, plausible and wrong."  In the case of Pruitt-Igoe, that applies both to the original conception and its subsequent interpretations.

An acclaimed new documentary, The Pruit-Igoe Myth "debunks the myths and searches out the true causes of the project's failure."  The 83 minute film directed by Chad Friedrichs will have two showings at the Gene Siskel Film Center, 164 North State, at 5:15 p.m. on Sunday, August 7th, and at 6:15 Thursday, August 11th. 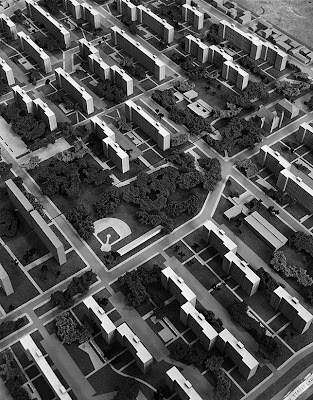 In St. Louis as in Chicago, the forest of high-rises was not anyone's first choice.  Just as Richard J. Daley had resisted the idea of relying on high-rises for public housing, Yamasaki's original conception was for a mixture of high-rise, low-rise and walk-up buildings.  But in St. Louis as in Chicago, in an early supply chain experiment, the Feds mandated that high-rises were cheaper and more efficient, just as in St. Louis, they decided to save money by only having the elevators on three of the eleven floors of the high-rises, and to "value engineer" by making the units too small to be livable.

In Chicago, as in St. Louis, public housing followed a usual trajectory.  At the start, it was a major step up from the slums, and residents were drawn from all races, a large percentage holding steady jobs.  Management screened applicants, and operated the buildings professionally.

As time went on, management became more political.  Funds for maintenance were at a premium, and not adequate for keeping the buildings in repair.  (The same Federal Government that approved the building of Pruitt-Igoe somehow forget to include funds for maintenance.) People who had good jobs fled as soon as they could, and the projects increasingly become a dumping ground, with screening going out the window, and fewer and fewer residents employed.  According to a review by Chris Barsanti . . .


One particularly harebrained housing authority policy prohibited able-bodied men from inhabiting apartments of residents on welfare; essentially dynamiting the project's family structure. In short order, elevators stopped working, broken windows weren't fixed, and a bleak air settled about the place, followed by the inevitable lawlessness and what one resident termed "a prison environment."

When cheap suburban land and the expressways opened up the floodgates for white flight, the projects re-segregated with a vengeance. 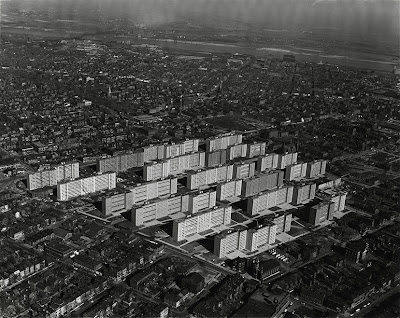 The tabula rasa approach detached the projects from any sense of historic continuity with the city around them.  The massive scale and homogeneity of Pruitt-Igoe's design, 57 acres and 33 11-story buildings, made it difficult for a resident to find anything to cling to.  The buildings were all the same, one after another, a gulag of warehouses where residents became human widgets, stuffed side by side into identical cells,  whether they were a family struggling to build a future, or those already lost to drugs, gangs and crime, rotting the buildings to get through a single additional day.

At the beginning, residents made the projects a real neighborhood, proudly festooning their units with Christmas lights.  Now, as in Chicago projects like Cabrini-Green, as the districts re-gentrify, all evidence that they had ever existed has been clinically removed. 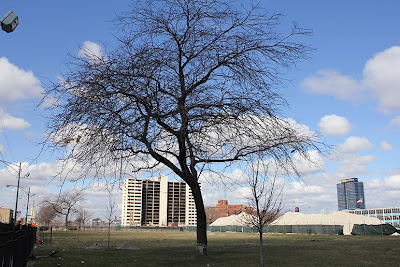 34 of Pruitt-Igoe's acres remain vacant, overgrown with wild shrubs, and trees that have now lasted longer than the buildings they replaced. 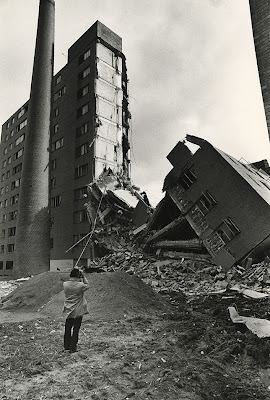