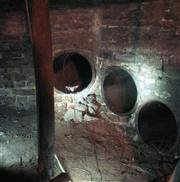 We're told there are still some $45.00 tickets available for tomorrow's Geothermal HVAC tour at Frank Lloyd Wright's Unity Temple in Oak Park.  And while that may not, on the surface, sound like the most fascinating topic in the world, there are actually a couple of good stories behind it.

In 1908, Frank Lloyd Wright designed a state of the art heating system for Unity Temple, involving a coal-fired boiler and electric fans that forced the warm air through a series of subterranean tunnels snaking below the building.  It was ahead of its time.  And it didn't work.  Parishioners either froze or broiled, and there was a story that so much heat was generated outside the building trees became to bloom in the winter.  More conventional - and reliable - steam radiators were installed in the building, which survive until today.

Now, Unity Temple is in process of constructing a $1.5 million ground source heat pump system that's projected to reduce energy consumption by up to 70%.

And you can learn all about it and see it history and beginnings for yourself.  On Thursday, August 25th, from 7:00 to 8:30 p.m., Mark Nussbaum, mechanical engineer and geothermal expert, will talk about Wright's original 1908 heating system and lead an extended tour of the new system including the field for the 650-foot-deep wells, the original boiler and fan rooms, the access points to the tunnels, and "hidden mechanical chases."  There will also be appetizers and drinks from Oak Park's Maya del Sol.

All proceeds benefit the restoration of Unity Temple.  You can find out more and purchase tickets here.

It wasn't state of the art if it didn't work.

New boiler Aldeburgh is one of the company who provides gas engineers to install, repair or change your boiler. You can learn more to them and get more services when you visit them. Try to check it out!

More conventional - and reliable - steam radiators were installed in the building.
HVAC SEO