We've written a couple times of the potential of the much-maligned Illinois Center, the assembly of Mies van der Rohe-styled skyscrapers bunkered off of the Mag Mile.

The complex includes a claustrophobic retail concourse at street level,  and a large - and underused - open plaza above.  Part of the underuse is intentional.  The plaza is set behind 333 North Michigan and the Old Republic Insurance Building, and there is no direct connection to Michigan Avenue.  The last time we looked, a southern access stair off of east South Water was still boarded up, and the staircase leading up from east Wacker continues to deteriorate. 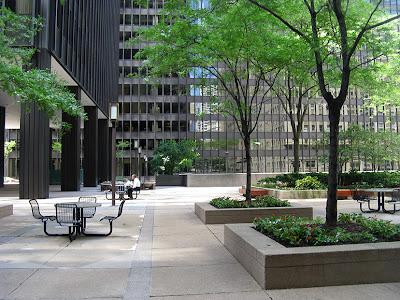 In 2011, the plaza's original Miesian grid paving was replaced with a carpet of Chicago concrete pavers in a herringbone pattern.  (You can still see the original design on the south side of the plaza near Boulevard Towers North).  The project was initiated by the former owners of One and Two Illinois Center, Parkway Properties, to address water leakage problems into the retail spaces below.

The company that designed that fix, Hicks Architectural Group, also presented Parkway with some ideas for upgrading both the plaza and the street-level entrances, moving the present grand staircase, and shifting the Wacker Drive entrance eastward to lead directly into the concourse/pedway. 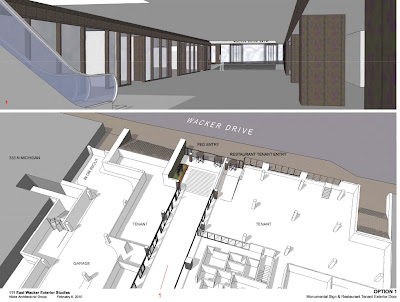 The plan also looked at creating a seasonal, 200-seat dining area on the southernmost part of the plaza, partially sheltered under the One  Illinois Center Building, with striking views of the Chicago River, Pioneer Plaza, the Wrigley Building and Tribune Tower. 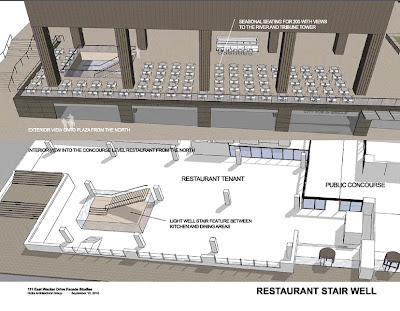 When you're dealing with a Mies van der Rohe building - and One Illinois Center actually began construction while Mies was still alive, under the direction of his office - there's always concern about preserving the integrity of the design. but while a traditional Miesian arcade sets the lobby back the width of one column-to-column center; at One Illinois Center that ratio is doubled.  It looks not merely empty, but unfinished. 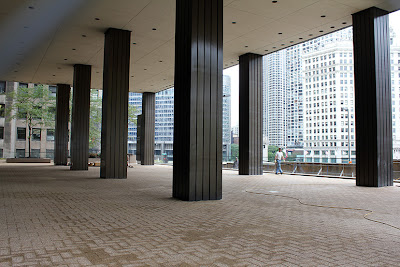 Completely over only four weeks, the Hicks proposal was a very preliminary study.  Reportedly Parkway liked the plan, but it wasn't  - like the plaza repair - essential to unloading the buildings, which Parkway did last year, selling both to Massachusetts-based Commonwealth REIT.

Commonwealth may have gotten itself a bargain. The $151 million it paid for One Illinois Center was far less than the $198 million price at which Parkway acquired the property in 2006, and it's reported to be 95% leased.  But with a new owner, the planning by Hicks was at an end.

The last major renovation of the properties was in the late 1990's.  Since then, Illinois Center finds itself in a potential sweet spot between the burgeoning population of Lakeshore East and the traditional tourist flow of North Michigan Avenue.  A retrofit of Illinois Center that integrates it into the fabric of the city, both spatially and functionally, is not just a civic imperative, but a potentially renumerative investment.