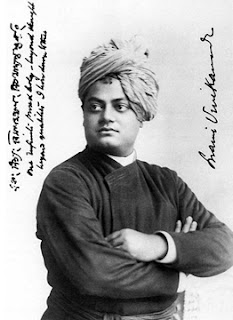 Before there was Art, there was Religion.  When its new, $625,000 building opened on May 1, 1893, the Art Institute of Chicago continued to do business at the building across the street, at Van Buren and Michigan, that Daniel Burnham and John Wellborn Root designed for them little more than a decade before.

During the course of the 1893 World's Columbian Exposition, the Art Institute building was headquarters for the World Congress Auxiliary and a 17-day-long Parliament of the World's Religions.  On opening day, a young Hindu monk rose to speak, and created a sensation with a talk on religious tolerance that would make him one of the century's most famous religious leaders.

Tomorrow, January 12th, marks the 150th birthday of that monk, Swami Vivekananda, and the Art Institute is celebrating with repeated showings, from 11:00 a.m. to 3:30 p.m. in Fullerton hall, of a 29-minute documentary on the Swami.  It's free with museum admission. 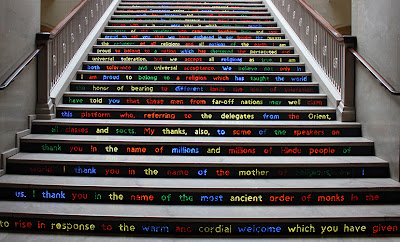