The woman who created the Architecture Beat: Ada Louise Huxtable dies at 91

Ada Louise Huxtable, the women who created the very idea of newspaper architecture critic when she took on that role for the New York Times in 1963, died Monday in the Manhattan she shaped with her vivid writings.  Huxtable was 91, and active to the end.  Just last month, she wrote an account of the controversy over Norman Foster's plans for the New York Public Library that was a model of reporting, concision, impassioned advocacy and clear, elegant writing .
It begins  . . . 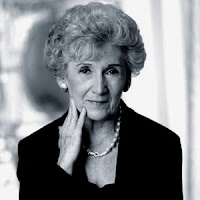 There is no more important landmark building in New York than the New York Public Library, known to New Yorkers simply as the 42nd Street Library, one of the world's greatest research institutions. Completed in 1911 by Carrère and Hastings in a lavish classical Beaux Arts style, it is an architectural masterpiece. Yet it is about to undertake its own destruction .  . .

Huxtable slammed the Library's “deplorable” communications, and called on Foster and the Library to end months of keeping the public in the dark and release the renderings of the Foster's design.  Within two weeks, they did.  As she anticipated, Foster's work is “functional and handsome”, but falls far short of being a valid modernist counterpoint to Carrère and Hastings' masterful original 1911 design.  Foster's depiction of the new Great Room that is to replace the Library's legendary stacks has widely been described as possessing all the charm of a swollen Barnes and Noble.

Ada Louise Huxtable championed the best in modern architecture and made the guilty sweat.  She was one who gave the vanity museum Edward Durrell Stone designed by Huntington Hartford at Columbus Circle a nickname - “the lollipop building” - that would cling to it like a derisive albatross down through the decades.  When the big-box high-culture superstore that is the Kennedy Center opened in Washington in 1971, Huxtable caught its stolid mediocrity on knifepoint.  “Albert Speer,” she wrote, “would have approved”

In our age of hyperbole, the word "great" flows like ketchup on the great, unwashed mass of the barely “ok”.  Ada Louise Huxtable was far beyond "ok".  She was the best.