I just came back from taking pictures of the James R. Thompson Center (and getting a flu shot at Walgreens) and find myself still in the midst of writing a piece on the history of the building and the proposal to turn it into a casino. (Had to do something with all that research I did for the WTTW segment.)

So for the moment  here's some news updates on local firms . . .

Last fall, nearly three decades after his former partner Charles B. Murphy's death, Helmut Jahn finally renamed his firm from Murphy/Jahn to simply Jahn, joining the ranks of uni-named superstars like Cher, Beyonce, and Gallagher.  Jahn also began setting up a line of succession by making Francisco Gonzalez-Pulido firm President, and, in a cost-cutting move, removed the crossbar from the letter "A". 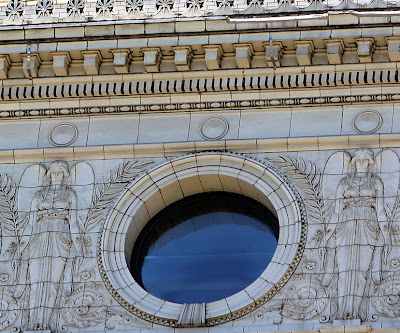 This morning finds news of another re-alignment at Goettsch Partners, which has its offices behind those beautiful round windows at the top of the Santa Fe Motorola Building which Daniel Burnham once called home.  Long-time head James Goettsch has been elected the firm's Chairman and CEO, while James Zheng has been named the new President, “in recognition of his outstanding contributions to the firm and his commitment to clients.”  Zheng remains director of the practice's substantial Asian operations, while Goettsch continues as design director.

Meanwhile, over at the NBC Tower, a new firm,  smdp LLC, has set up shop, rising from the ashes of  the recently defuncted DeStefano partners. 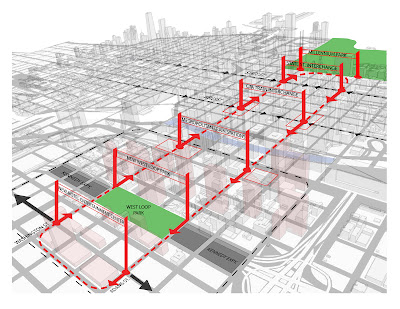 In addition to winning a competition for a 60-story tower in Beijing, the firm is working with Fifield Cos. (oh-oh) on a West Loop master plan that revives proposals to deck over the Kennedy from Washington to Adams for new development and an 8 to 12 acre park. 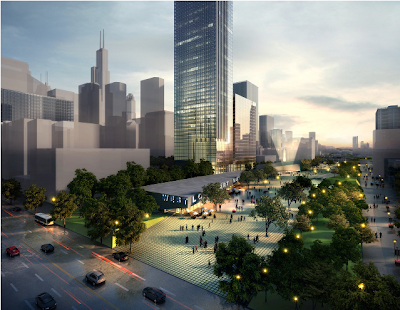