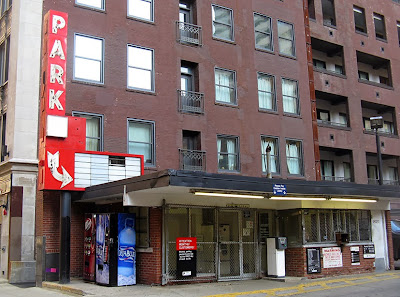 It was one of those abject buildings you can get rather fond of, the office for the Self-Park on Wabash between Randolph and Washington.  It's original clean modernist lines, blank marquee and neon arrow had long ago fell victim to long decades innocent of basic maintenance, but the strip windows, cantilevered roof and tall red “Park” sign still held a certain charm.

When plans were announced for a new apartment tower built along Randolph and reaching into the eastern edge of the surface parking lot on Wabash, the little hut's days were obviously numbered. 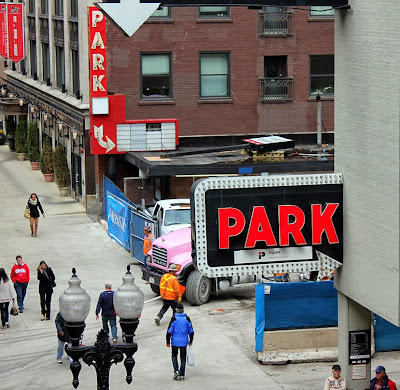 Strangely enough, even as the lot became a staging area for construction of the new tower, the Self-Park office was allowed to live on, it's old sign pole tossed unceremoniously up on the roof.

Then, suddenly, the building was gone.  But now - finally - we'll have something new and fresh on the site, something to raise the quality of design on Wabash, something like . . . 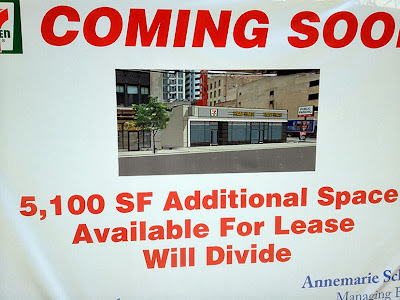 Yes, potential franchisee - all this can be yours, ready-made with that unmistakable visual thud of disposable-taxypayer charm.  (Will they really stick up the old sign at the back of the building?) Then again, we really need a 7-Eleven here, to save people the trauma of walking an extra block to the one in the Jewelers Building, or the one on Michigan Avenue.  If we're lucky, we might even get a pawnshop. 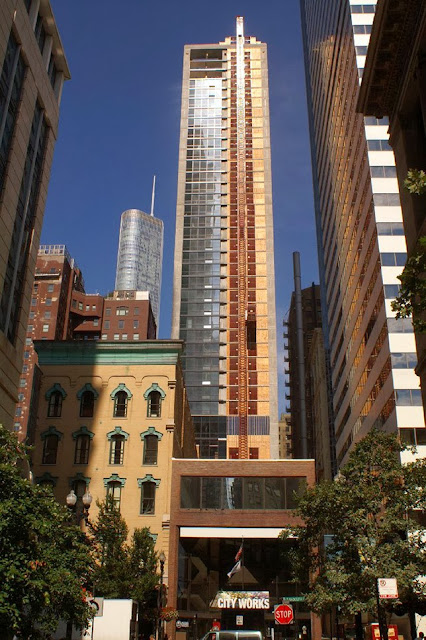 At least the new apartment tower, the 42-story Summit on the Lake, is humming along towards a 2014 opening, as seen in this view from Randolph in a photo by our indefatigable correspondent Bob Johnson.  Enjoy the look of that wood-faced construction elevator while you can.  It makes for a more interesting texture than what you'll find on the finished facade.

Email ThisBlogThis!Share to TwitterShare to FacebookShare to Pinterest
Labels: 7-Eleven, Summit on the Lake, Wabash Self-Park

there is one on lake around the corner too.. WTF

Unknown said...
This comment has been removed by the author.
1:30 AM

Unknown said...
This comment has been removed by the author.
1:32 AM