Before Sandra and Keanu - Building The Lake House 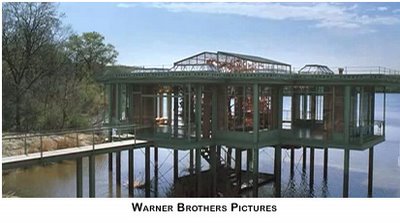 Kevin Nance has a nice article in Thursday's Chicago Sun-Times talking about all the Chicago locations used in the new Keanu Reeves/Sandra Bullock romance The Lake House, which was shot here last year and opens nationwide Friday. Written by Chicago native David Auburn, it makes use of an unusually diverse range of Chicago architecture, not just the usual tourist standby's such as the Picasso Statue and the ice rink at Millennium Park, but lesser-known landmarks as the Old Colony and Fine Arts Building. It's reported to be an exceptionally intelligent film - both Keanu Reeves and Christopher Plummer, his father in the movie, play architects. Nance draws an interesting parallel between the picture's time shifting theme and the way architecture, itself, is a kind of time travel that bridges historic eras with the present.

One thing Nance doesn't cover, however, is the film's title star. The Lake House was constructed specifically for the movie at Maple Lake in the Palos Forest Preserve, Production designer Nathan Crowley took the 2,000 square foot structure from sketches to completion in just ten weeks: 2 weeks design and documentation, 4 days bidding, and a scant seven weeks for actual construction. 35 tons of steel were used in the project, and a crew of nearly one hundred was required to finish the house by the time filming was scheduled to begin.

Structural engineers at McDonough Associates were honored for their work on the house by having it nominated as a finalist in the Structural Engineers Association of Illinois 2006 Excellence in Structural Engineering Awards (full disclosure: I served on the jury). The house was actually constructed on dry land next to the lake, atop steel beams that rose 10 feet above the waterline, which was created by excavating nearly 1,200 cubic feet of soil and letting lake waters flood in under the pilings. Although the house would be exposed to strong spring winds, Crowley vetoed diagonal bracing, which would obstruct camera angles. McDonough Associates had to come up with "moment resisting frames" that minimized the kind of lateral movement that could crack the house's all-glass walls. 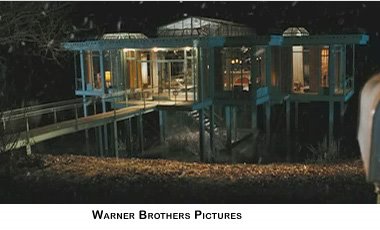 The Lake House, however, is the only one of the movie's Chicago locations that you can't revisit. It was taken down immediately after filming. The soil was put back, and it's now the site of a new fishing pier.

The Lake House. Beautiful beyond words is this house. Unfortunate victim of a false religion we're all negatively affected by: environmentalism. What a pity.

It's interesting to note that although this structure existed only for a short time, it was during that time that the satellite image currently available (as of 28 December 2006) of this area on Google Maps was taken, so the Lake House is visible via Google Maps.  The coordinates are North 41°42′49.96″ by West 87°53′10.62″.

Other similar services which show satellite or aerial photographs of this area only show a bare clearing at this location.

A beautiful,beautiful house. I've been digging everywhere for more details on this structure.

Such a waste it was destroyed.

My friend and I adore architecture and want to take the walking tour featured in, "The Lake House". Does anyone know how to get hold of a copy of this map? We're planning a trip to Chicago in the spring and we don't want to miss a thing! Thank you in advance.

would love to know if I could have this house rebuilt. My life long dream has been this very house since I was a young child. I have dreamt living in this house on the water. I would love to have it recreated here where I live in Texas.

Went to the fishing pier. It was emotional for me to stand where amazing actors once stood. Wish the house was never taken down. But I’m sure glad I live just 30 minutes from Willow Springs. Boy, am I lucky.